In the mystery-writing community, people tend to divide themselves into plotters or pantsers. This seems to me to set up a false dichotomy where real authors either write out rigid, detailed outlines of their entire books before they begin their first draft or they start with nothing but perhaps an image or a line and then wing their way through the entire book. I know this divide isn't true, and if you look, you can find plenty of interviews with and articles by established mystery writers saying this isn't true, but still, this either-or myth seems to fill the air and create problems, especially for fairly new writers.


I'd like to suggest that there are myriad ways to write a mystery or thriller that partake to varying degrees of both methods and yet are neither. Probably the initial freeing knowledge in this arena that I encountered was from best-selling and award-winning Elizabeth George. George has also written a great book on writing the novel, especially the mystery, Write Away: One Writer’s Approach to Fiction and the Writing Life, in which she discusses the way she writes her own highly successful mysteries. She plots out in broad general terms what will happen over the first 50 pages, goes into more detail about what will happen in each scene right before she writes it, and then she changes that rough 50-page outline to adhere to what she actually wrote in those first 50 or so pages, plots out in general terms the next 50 pages, and proceeds this way through the first draft of the entire book. At the end, her outline shows the basic structure of what she's actually written, providing a tool she can use in revision. 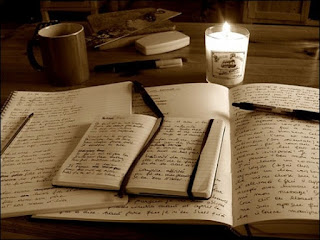 George's practical method was very close to what I was actually doing. I felt like a failure because I couldn't stick to a pre-determined outline of a whole book, nor could I just wing it without finding I'd often left out the drama my book needed. But, hey, if Elizabeth George did it, too, maybe I wasn't such a failure.

The truth of the matter is that any way you can get a good book written is the right way for that book. Some people love those detailed outlines—I've heard some authors claim their original outlines are longer than the books themselves. Some people can fly across the page on a wing and a prayer with no preparation, never knowing where they're going until they reach the end, without later having to throw away huge chunks of draft and spend ages on major revisions to try to inject some action and drama into their manuscripts. As far as I can tell, however, both extremes are fairly rare. Usually, in talking with writers, I find they use some mixture of the two methods. Perhaps they think a great deal and even make notes about the world of the book, the dramatic situation, and the characters—notes they may later refer to or not, as the case may be—and then they just start writing, having gassed up the story machine in their unconscious with their earlier thinking, and just keep going until the end. Perhaps they wing it until they get into trouble and then they work on figuring out what happens next before winging it again for a while, cycling in and out of that process throughout the book. This is a strategy I have also used before and may well use again.

We find what works for us for this particular book—and the thing is, that tends to change with certain books—and that becomes our method, until it no longer works for the book we're on now. So I urge all of you to eschew the seeming requirement for rigid extremes. Try some of these hybrid methods and see if any one of them will work well for you with the book you're writing now, keeping in mind that it's not the only one and you can change to another of them when it no longer helps. You might make up a hybrid method that I haven't mentioned that will work well for your book, or you might find another that I haven't mentioned in an interview with a writer you admire. Use what works for you at the stage you're at right now.

New novelists, especially, can find it difficult to successfully juggle all the plates of character, conflict, action, motivation, background and setting, dialogue, scene structure, plot points, emotional turning points, plot complications, subplots, and a million more from the beginning. Thinking ahead and planning for effective use of some of these aspects of the novel is a completely successful way to work, even if you want to wing the rest of it.

These are my two cents on the whole plotter vs pantser thing. How do you work?