No longer do I head off to far-away places that need to be reached by air. (I may ignore that decision if something intriguing enough should arise, but that's how I'm feeling now.) Most of the in-person appearances I'll be making in the next few months are driveable.

Last Saturday was the first one of this year, a local authors' day at a lovely library several cities away. A fun time and I connected with a friend and fan who recetly moved to this city and  met many other delightful readers. 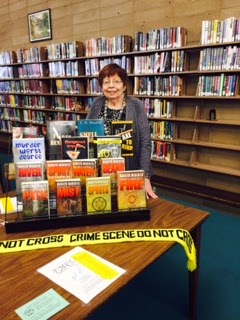 On March 14th, from 2-4, I'm participating in a peanl about how mysteries have changed sine the days of the Maltese Falcon at a wonderful used bookstore--the Book Barn in Clovis. The reason for the Matlese Falcon is that is the book for the Fresno Library's annual Read-a-thon.

Because I'm a board member of the Public Safety Writers Association, I'm headed to Ventura for their annual board meeting the following weekend. Not a book selling event, but important for the organization--with a bit of fun thrown in. Plus, I have a daughter who lives nearby and we'll squeeze in some time with her and her family.

The last weekend of the month, we're off to Santa Maria, where we're staying in the Santa Maria Hotel--this is where all the movie stars stayed on their way up the coast in the good-old days. The lobby, dining room and bar area are full of nostalgia (there's even a bank of private telephone booths), We like to stay in the older part of the hotel--the rooms are smaller, but each one is unique and they are the actual rooms the stars stayed in--some even with name plates on the doors.

On Saturday, the March 28th, I'm speaking to the Central Coast Sisters in Crime, 10 a.m. at the Nipomo Library. My topic: How to Create and Sustain a Mystery Series. I belong to this chapter but don't get to go over there often enough. I'm looking forward to sharing and seeing everyone.

On April 2nd, I'm participating in a Mystery Authors' Symposium at 6:30 p.m. in the Fig Garden Library in Fresno.

My official book launch for Violetn Departures is on April 16th at 6 p.m. in the Porterville Library--and there's going to be cupcakes!

And that's about it until July 16-19 when we'll be in Las Vegas for the Public Safety Writers Association's Annual Conference. Love this conference where mystery writers can share and learn from all sorts of law enforcement officers, firemen, and other public safety personnel. I've become friends with so many of this group who are willing to share their expertise.

As time goes by, I"m sure I'll be booking other dates for appearances--but that's it for now.

For all you readers out there, do attend author events in your local area, it means a lot to those of us who do these.

Looking forward to meeting and introducing both my series to new readers.