Here are my three firsts: 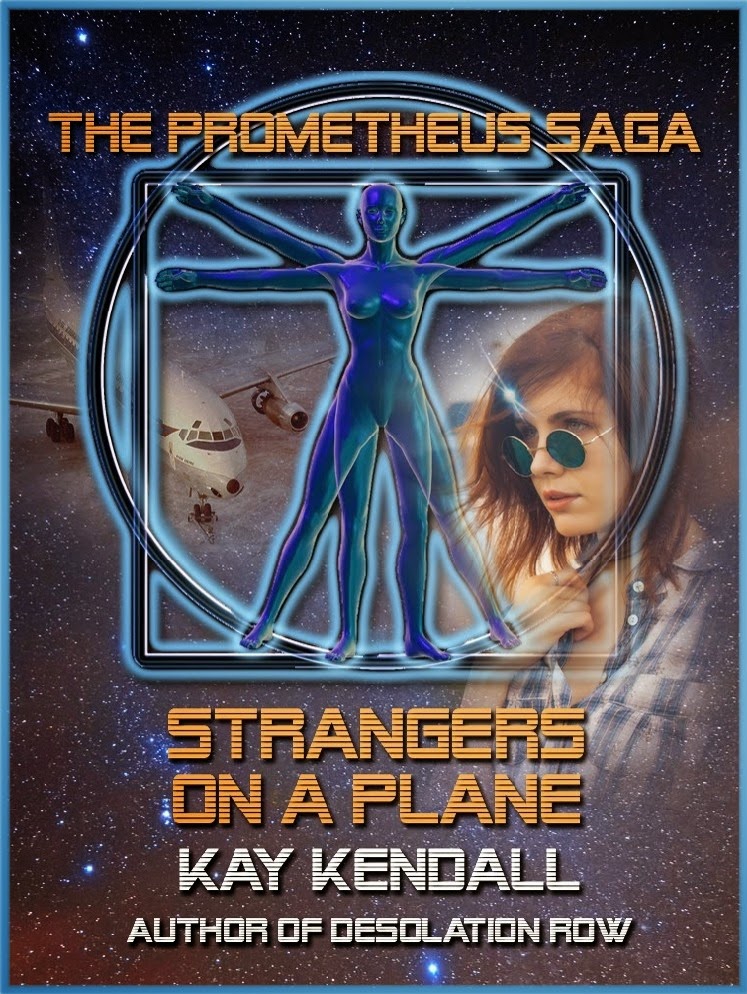 1) My first short story.
2) My first venture into sci-fi.
3) My first self-published project.

The shortest way to explain that list above is  – I seized an opportunity.

A group of writers asked me to come aboard an anthology of short stories written around a common theme—called The Prometheus Saga. There were rules to what we could do with our alien character who dropped to earth, plus rules for making our stories as Kindle shorts available only on Amazon. Set price = 99 cents. Such a bargain.

On Monday, January 26, twelve of us published thirteen stories in The Prometheus Saga. Settings include pre-history, the American Revolution, and the sixties. That latter was mine, entitled “Strangers on a Plane.” The sixties is what I write about, always.

Fans of the suspense genre will recognize my title as an homage to the great Patricia Highsmith’s sinister novel, Strangers on a Train. But my story is not sinister. Instead, it shows my amateur sleuth Austin Starr traveling across the North American continent, rushing to the rescue of her dear friend, Larissa Klimenko. Readers who know my debut mystery DESOLATION ROW will recognize these characters.

New is an odd elderly woman who calls herself Promethea. Strange things happen. Then Austin and Promethea disembark from the plane, never to see each other again. This short story is a bridge to my next mystery, RAINY DAY WOMEN (due out this summer), and the sci-fi touch is so light that I don’t bend the mystery genre—not too much.

Why did I seize this opportunity? Advice to writers is to issue short stories in between major books as a way to keep your readers interested. While some of my author pals crank out more than one book a year, I don’t do that. Thus, this advice seemed wise.

Moreover, there was a chapter I dearly loved that for various reasons my editor suggested I chop from my next book. Here was a way to save it.

Finally, authors are encouraged these days to become “hybrids.” That means that you mix up your projects—some issued through publishers and others self-published. When I checked, the wonderful Ken Coffman, owner of Stairway Press of Seattle, was fine with my participating in The Prometheus Saga.

So, here’s the bottom line. If you ever felt a tiny urge to read my fiction and never acted on it, you now can do so for only 99 cents. You don’t even have to own a Kindle. There’s an app that lets you read “Strangers on a Plane” on your tablet, cell phone, PC, or Mac. Return to the time of America’s first moon landing, the week of the horrid Manson murders, and endless bad news from the Vietnam War. August 9, 1969—with just a hint of the paranormal!

Kay Kendall set her debut novel, DESOLATION ROW--AN AUSTIN STARR MYSTERY in 1968. The sequel RAINY DAY WOMEN (June 2015) shows her amateur sleuth Austin Starr proving her best friend didn't murder women’s liberation activists in Seattle and Vancouver. A fan of historical mysteries, Kay does for the 1960s what novelist Jacqueline Winspear accomplishes for England in the 1930s–present atmospheric mysteries that capture the spirit of the age. Kay is also an award-winning international PR executive who lives in Texas with her husband, three house rabbits, and spaniel Wills. Terribly allergic to the bunnies, she loves them anyway! Her book titles show she’s a Bob Dylan buff too.