The Stiletto Gang is pleased to welcome Elizabeth Zelvin. Author, therapist, singer, Liz has lots to share about her new book, new CD, and so much more!


1. Where does your new book, Death Will Extend Your Vacation, pick up the story of Bruce Kohler?
Bruce got sober at Christmas at the beginning of Death Will Get You Sober. In fact, waking up from a blackout in detox on the Bowery on Christmas Day was his wake-up call, or as they call it in AA, hitting bottom. The short story, “Death Will Clean Your Closet,” takes place when he’s 90 days sober, which is a big milestone in recovery. He’s still in early recovery in “Death Will Tie Your Kangaroo Down.” There’s an unpublished novella (formerly a novel) that covers Bruce’s first sober summer. Death Will Help You Leave Him takes place in the fall. “Death Will Trim Your Tree” covers his one-year anniversary Christmas. And his sobriety is well established in the latest story, “Death Will Tank Your Fish.” So Death Will Extend Your Vacation tells the story of his second sober summer—long enough for him not to worry much about drinking again, no matter what’s going on, and ready for a girlfriend, if he can only get to first base with Cindy, the attractive and slightly mysterious woman who’s one of his housemates in the clean and sober group house in Deadhampton (Dedhampton on the tax map) where everybody has at least one secret. Bruce’s, by the way, is that the beautiful housemate whose body they find on the beach is the first girl he ever almost slept with when he was fifteen. Actually, he’s keeping another secret from his best friends Jimmy and Barbara, because he thinks they’d kill him if they knew. But you’ll have to read the book to spot it.
2. Has your writing routine changed since the publication of your first book, Death Will Get You Sober? Tell us about a typical day.
The nice thing about my typical day is that there’s nothing typical about it. I have, not one, but two careers that let me spend the day at the computer in my jammies: writer and online therapist. I usually say “sweats and bunny slippers,” but in fact, it’s usually one of a collection of ankle-length sleep T-shirts—very, very comfortable. My prime writing time is in the morning, but since the morning is my best time overall for anything that requires a lot of focus, I don’t always use it to write. I see my therapy clients regularly, but none of them is on a fixed schedule. One of the advantages of online therapy is its flexibility. For example, a client who lives in the is five hours ahead of me, so I have to see her during my afternoon, her evening; but when she goes on vacation to , we can meet at my 8:30 AM, her 10:30 PM. And if she’s visiting her dysfunctional family for three weeks, believe me, she doesn’t want to skip her therapy sessions. Anyhow, I start the day with stretches. I run for an hour every day, usually around the reservoir. And when I’m in the zone with the writing, I might take a little nap on the couch in the afternoon (ah, the joys of not having a day job!) so I can go back to the computer with zest. But the best thing about an unstructured day is that I allow time for my mind to be in that relaxed state in which the characters start talking to me, the mist parts, and I can see where I’m going, at least enough to go forward. It frequently happens when I’m running or in the shower, but the best time is when I’m lying in bed, definitely awake but not yet ready to open my eyes and get up. If I had to leap out of bed to the jangling of an alarm, the way I did when I was working full time, my muse (or whatever you want to call it) would be a dead duck.


3. What have you learned from your fans?
The best thing I’ve learned from my fans, to my grateful astonishment, is that I can write the kind of characters I love to read: endearing characters who feel real to the readers. I’ve also learned that book club readers pay very close attention to details: the members of two book clubs—one mostly women over 50 and the other women in their 30s—noticed a problem with the age of the victim in Death Will Get You Sober. Guff, the déclassé aristocrat with the dysfunctional Park Avenue family who dies unexpectedly in detox on the Bowery, setting off Bruce’s sleuthing career, is supposed to have gone to just before the end of the conflict in the early Seventies. Then, when Barbara reads his medical chart, it says he’s 47, which these two groups of ladies pointed out didn’t make sense. They were right. I had a good excuse: the six years between when I started sending the manuscript out and when the book actually got published. I spotted many needed changes—for example, when the book was in galleys, I realized I couldn’t have the patients smoking in detox any more—but I missed that one. 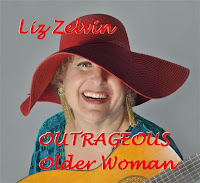 4. Tell us about your new CD, Outrageous Older Woman?
This is a project close to my heart. I’ve been singing almost as long as I’ve been writing, I learned to play guitar when I was 13, and for the past half century or so I’ve been writing songs and performing them for my friends with an occasional coffee house gig. Over the last two years, I finally recorded them, singing lead vocals myself but getting some terrific musicians far more skilled than I as backup. The result is Outrageous Older Woman, which is available in CD or mp3 download form on my music website at  lizzelvin.com as well as CD Baby, iTunes, and Amazon. If you go to my site, you can hear six of the songs in full and previews of all sixteen. If you’re in this weekend, I’m performing live with a couple of those musicians on Saturday May 19 at 8 pm at the People’s Voice Cafe, details on my music site. What are the songs about? A very nice review by John Lindermuth said, “Love is a consistent theme, though only three of the songs actually deal with love.” He got that exactly right. The title song is about empowerment, and there are songs about Internet dating, aging, family, alcoholism and recovery, abuse and healing, moments of decision, and characters who have inspired me. As with my books, I want to make the listener laugh and cry.
5. What's new on the horizon for you? What projects are you working on? Another sequel? A new series?
Death Will Extend Your Vacation is just out, so I’m trying to spread the word about that and the Outrageous Older Woman CD. I’m also trying to find a home for Voyage of Strangers, a YA novel about what really happened when discovered . It’s the sequel to my two short stories about Diego, a young marrano sailor with , which both appeared in Ellery Queen’s Mystery Magazine. And Untreed Reads is publishing “Shifting Is for the Goyim,” an 11,000-word paranormal whodunit about a nice Jewish girl who’s a rising country music star and happens to be a shapeshifter. Either of those protagonists might be the star of the next manuscript. Or if Bruce and Barbara start talking in my head, the next story could be about them. But in fact, I’m currently working on an academic piece, revising my chapter on partners of substance abusers for the third edition of a friend’s book.

Elizabeth Zelvin is a psychotherapist, a three-time Agatha Award nominee, and author of the mystery series featuring recovering alcoholic Bruce Kohler, starting with Death Will Get You Sober.  The third book, Death Will Extend Your Vacation, is just out, and “Death Will Tank Your Fish” was a 2011 Derringer Award nominee for Best Short Story. Liz has also just released a CD of original songs, Outrageous Older Woman. Her author website is www.elizabethzelvin.com  and her music website, www.lizzelvin.com. Liz blogs on Poe’s Deadly Daughters and SleuthSayers.
Posted by The Stiletto Gang at 5:00 AM

Email ThisBlogThis!Share to TwitterShare to FacebookShare to Pinterest
Labels: Death Will Get You Sober, Elizabeth Zelvin, Outrageous Older Woman, therapist