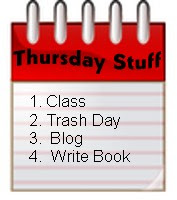 I'm writing this on August 31 since I'll be traveling on September 3, attending a defensive driving class. So these are really the thoughts I had on August 31 about September 3. I think it's important to think about what you might be thinking about on a future date. (Yes, I'm smiling). Think about it - thinking ahead saves time. And keeps you from dwelling on the past which would be now if I'm thinking about Thursday.

So on September 3 my thoughts would be ...

1. Staying in hotels when you're working isn't that much fun. Noises from the ice machine kept waking me up last night.

2. I love using my Blackberry as an alarm clock – no worries about wake-up calls or tinkering with the unfamiliar clock radios provided by the hotel. I have sixty-eight emails to individually delete from my smart phone. Wish it was smart enough to have a "delete all" button.

3. The free breakfast was well priced for the value. I'm sure that biscuit came with a long history!

4. The defensive driving class I'm taking today isn't what I expected. I was hoping for hints about driving on ice. Instead they want me to give up talking on my cell phone while driving. Can you imagine?

5. I need more coffee if I'm going to stay awake all day.

6. The people behind me are talking too loudly. Serve them right if I use their conversation in my next novel.

7. Is it almost over yet? I swear I'll never talk on my cell phone and drive at the same time. No, really! I'm really going to try not to.

8. The drive from Oklahoma City to Muskogee hasn't gotten any shorter in the last 25 years. No, I'm not talking on my cell phone during the drive.

9. Weather guys didn't predict rain for today! I don't know why I bother to watch their forecasts. Wait, I'm getting a weather alert on my cell phone – not that I'm looking at it.

10. Speaking of "looking," home always looks great as I'm pulling in the driveway – or at least much better than it did when I left.

11. Except ... Sigh... It was trash pick-up day today; which means I have to pick up the trash that blew out of the bins when the trash trucks made their pick up. Have you noticed that like most things, automated trash pick-up is not as good as when live people did the job?

12. Nothing good on television tonight. When do the new fall shows start airing? I need to make a decision about buying a new television soon. Typically, I want a model that I can't afford.

13. Time to write a best seller – or at least one that will pay for a new television.