Is it Thursday? Already?

Time for me to blog again.

And again, my thoughts are scattered. Just got home from Oklahoma City. I was there for the day to meet with my federal counterparts. The topic was hydrology structures on coal mining sites and the need to correct a conflict in the text of our state regulations. Sometimes figuring out the mystery of environmental regulations that were drafted and passed 30 years ago is impossible, even for a mystery writer.

My new office (remember the move I mentioned a few weeks ago?) is still not finished. All our desks, files, computers, etc. are in storage. My staff and I are working from our homes, vehicles, and another field office located about 50 miles away. Although working at home sounds like fun – for me it's not. I already have an unorganized mess in my living room involving the next Evelyn David book and the promotion materials for the one published last month. Adding in mining reports, mining mail, and copies of regulations and forms, has pushed me right over the edge. My living room is officially a national disaster area.

Tomorrow morning I will drive 15 miles to the new office space, stand outside the half-finished building, tap my foot and glare at the contractor. Then I'll head to the post office, pick up the agency mail, date stamp it and log it into a notebook while sitting in the parking lot, then drive home. After some lunch (or a late breakfast), I'll return phone calls (all our office calls are being forwarded to our Oklahoma City office) and deal with e-mailed mining inspection reports that I have to approve.

Since it might be two more weeks (sigh) before we can move into the new space, I've set up a weekly Tuesday meeting with my staff at the Pizza Hut. The meeting conditions are primitive (no buffet except on Fridays – the buffet being another causality of the poor economy) but we're a hardy bunch. We'll manage. 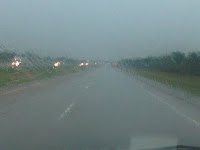 It was raining off and on all day. My two hour drive home was grey and long. Since my work routine has been totally destroyed, I'm having trouble keeping track of what day it is. I think the painting is supposed to start tomorrow on the new office. And since tomorrow is my blog day, it must be Thursday, which is also trash day – meaning I need to go outside tonight – in the rain - and drag the trash bin to the curb.

On a positive note, both Evelyn David books are selling well. So well they keep going out of stock at Amazon and Ingrams. This means when I promote the book, 50% of the time the buyer has to wait, which makes both halves of Evelyn David very nervous. Our publisher told us today that we had two choices: sell less books or mentally learn to deal with the "out of stock" issue. I may have to take up some kind of meditation or maybe medication! (Note: Barnes & Noble still copies of both Murder Off the Books and Murder Takes the Cake available to ship now.)

I got my latest Amazon order in the mail today. No, I'm not the one buying up all the copies of Murder Takes the Cake! In a mad splurge, I ordered season one of True Blood on dvd and a book recommended by the DorothyL listserve – The Sweetness at the Bottom of the Pie. The book looks good! It's a hardback, yet didn't come with a dust jacket. Is that a new practice? Or did Amazon just forget to send it to me?

On an unrelated note – buyers beware. I purchased a blackberry curve from T-Mobile. After three months I'm still waiting for my $100 rebate. Several weeks ago, they wrote and asked for another number off the cell phone box. I think this is the point where most people give up, having tossed the box after filling out the rebate form. Not me. I kept everything. It was still in a pile near my desk. I put the additional information in the next day's mail to T-Mobile. I also kept copies of all the correspondence. I'm going to get that promised rebate! The rest of my life may be out of control – but if necessary I will make getting that rebate my mission in life! Hear that T-Mobile? You've been warned!

Next week I'll blog about something important. Maybe North Korea and those two American journalists that are being held hostage there. Or maybe the economy. Did I mention the state agency I work for just got a 7% budget cut for next year? It seems clear that in Oklahoma the economy is going to get worse, before it gets better.

Nothing seems to come easy anymore. Maybe it never did and I just didn't notice.

I'm sure tomorrow will be a better day.

Right! At least it will be a different day.

Evelyn David
http://www.evelyndavid.com
Posted by The Stiletto Gang at 5:00 AM