Today’s one of those days where I’m all over the map, so I thought I would do a round-up (see #1 and #2) on some topics that I’ve written about previously and let you know about some promotional gigs that Evelyn David and I will be doing and how they’re going. I hope you’ll indulge me this meandering post.

1. Youth Lacrosse: On Saturday, our kids got beaten up so badly—and I don’t mean that euphemistically—that Coach called the game midway through the third quarter. He decided that our kids didn’t need to be taking sticks to the face, ribs, and legs all in the name of winning a game in the third and fourth grade league. Just wasn’t worth it. Thanks, Coach. And thanks for your email on Sunday, apologizing for calling the game; as you saw from every response you got, we’re all behind you. We just don’t care that much about winning. We care more that our kids can get to middle school with all of their teeth and bones intact.

Fortunately, Sunday was a new day and the team played their last game. I am proud to report that it was played clean, with everyone surviving the nine to three loss with their teeth, bones, and pride intact. Child #2 was thrilled with the fact that he scored the last goal of the season, which by all accounts, was a beaut, complete with NOT ONE, BUT TWO spin moves. Kid is thrilled with himself.

2. Chick Lit: I’ve been thinking about this classification for a while now, wondering whether or not I like the sound of it, especially as it relates to the Murder 101 series. I am big fan of chick lit, and will read anything by the biggies in the niche—Jennifer Weiner comes to mind immediately but I am sure I can think of more. And regardless of whether or not it falls into this category, I’m ordering fellow Stiletto ganger Susan McBride’s Cougar Club as soon as I can because it looks like a complete hoot and I am hoping that I’ll be done with book #5 at that point and can relax. (Yeah, sure.)

A friend was kind enough to drop off an article from the NY Times this past week in which a character in a book being reviewed remarks that if Updike was a woman writing today, they would have slapped a pink cover on the Rabbit series because after all, they’re about relationships, right? Good point. The writer goes on to say that you can tell a chick lit book by its cover. How? Well, if it’s got shoes, a martini glass, even an Adirondack chair, you’ll know that it’s a book for you, if you’re a fan. I don’t know what the writer would say about books that include blood-splattered writing pads (see Final Exam, the fourth installment in the Murder 101 series); I’m hoping that is the mark of an excellent mystery.

Oh! And I almost forgot! My friend, Sheila Curran’s, publishes her second book today and I’ve read it. It’s fabulous. It’s called Everybody She Loved and you will not be disappointed. 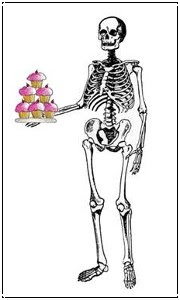 3. Book Signings: The Northern half of Evelyn David and I had a book signing this weekend at a great bookstore in her town called Anderson’s. We’re currently on the “Cupcakes and Corpses” tour. Evelyn, as is her way, baked all of her own goodies and brought them, beautifully displayed on a tray. I bought three dozen red velvet cupcakes from a friend with a baking business because as I said repeatedly (I love when a joke works), “If I had made the cupcakes, we would actually have some corpses around here.” So thank you to Anderson’s, Evelyn for setting up the gig, Susan for baking my cupcakes and making me look so good, and everyone who came to support us (most of all!). We sold a good number of books, had a great time, and met wonderful people. And any day that I get to spend time with Evelyn David is a good day in my book, so it was a success all around. The next stop on the tour is the Village Bookstore in Pleasantville on Saturday, June 20, from 1-3. Once again, I will be bringing Susan’s cupcakes and you don’t want to miss that!

I think that’s it for today. I hope all of our readers are enjoying spring; we here on the East Coast are wetter than we’ve ever been. Seriously. Enough, Mother Nature. We hear you.

Maggie Barbieri
Posted by The Stiletto Gang at 5:00 AM