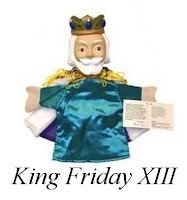 He had a boyish charm, a sweet smile, and a terrible sense of fashion. Some found him boring.

Me? I fell in love with Fred Rogers the first time I met him in the neighborhood.

Which is why I was so upset when I heard that PBS will stop transmitting Mister Rogers Neighborhood as part of its daily syndicated lineup beginning in September. Local public television stations can still choose to broadcast the program daily, but they are less likely to do so without the program being included in PBS’s syndicated feed.

Unlike Sesame Street which never captured the attention of any of my children, low-tech Mister Rogers with his trolley and hand puppets was must-see tv for years. Don’t get me wrong. It’s not like PBS was the only station that was programmed on our television. My kids watched the same crap that everyone else, including Mister Rogers, decried. Violent cartoons? Sure. Stupid sitcoms. Bring ‘em on. World Wrestling Federation? Sigh, yes. I confess, I even took two of my kids to a rumble at the County Center (and boy, was I the coolest Mom for at least three days).

But Mister Rogers was the perfect counterpoint. With his familiar routines and comforting songs, he spoke to my children and taught them more than all the clever 30-second educational scenes that flashed on Sesame Street. Mister Rogers reassured them that “the very same people who are good sometimes; are the very same people who are bad sometimes.” He taught them that make-believe is a land you should visit everyday. He made it clear to each child, “It's you I like; It's not the things you wear. It's not the way you do your hair, But it's you I like.” He wanted children to love themselves and others.

Son number two adored Fred Rogers. For his fourth birthday he wanted nothing more than a zip-up sweater like Mister Rogers wore every day. Well, that’s a slight exaggeration. He also wanted wrestling action figures, a new baseball mitt, a bike, and an assortment of other toys that had zero educational value. But, he did desperately want that sweater. I searched high and low for a mini-Rogers sweater and the look of sheer delight on my son’s face when he opened that present is still vivid all these years later. He promptly ran to get his dress shoes and faithfully re-enacted the shoe swap that Fred Rogers did at the start of each show, then zipped up his new sweater with a flourish.

Without bells and whistles, Mister Rogers dealt thoughtfully, gently, and age-appropriately with the fundamental themes of childhood. Write to PBS and tell them that Mister Rogers Neighborhood belongs in all our homes.

For more information, check out: http://savemisterrogers.com/

Posted by The Stiletto Gang at 6:00 AM