Don’t Hate My Amygdala: The Reality of Violence

Julia Buckley is a mystery writer who lives in the Chicago area. Her first mystery, The Dark Backward, was released in June of 2006; her next book, Madeline Mann, received glowing reviews from Kirkus and Library Journal. Julia is a member of Sisters in Crime, MWA, and RWA. She keeps a writer’s blog at www.juliabuckley.blogspot.com on which she interviews fellow mystery writers; her website is www.juliabuckley.com She is currently at work on a new mystery series featuring an amateur sleuth and English teacher.

I have two sons. The other day, I asked the little one (ten years old), if he’d like to go for a walk. He agreed that would be fun, but said he wanted to leave a note for his older brother, who was not home.

The note, in his sweet childish handwriting, said this:

“Ian: Mom and I went for a walk. I killed Winston.”

The last part was jarring; I knew that he had to “kill” people in his video game, but I didn’t realize what a matter of pride it was that he had finally achieved this particular murder. There is some honor attached, apparently, since Winston is “bad.” 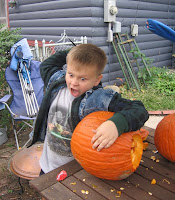 As a mother, I’m always a bit torn about video game violence and my sons. On the one hand, they are boys. Even if I gave them only soft dolls to play with, they would pretend those dolls were guns or bombs (believe it). Their level of testosterone has grown to the extent that, while they tolerate me and love me, they are jubilant when their father gets home and they can all mock-attack each other with various made-up martial arts.

On the other hand, I hate to think that by letting them play violent video games with words like “kill” and “assassin” in the titles, I am somehow warping their minds. A study posted here suggests that there is actual evidence in brain scans that shows the amygdala (the tiny emotion center of the brain) is highly affected when young people play violent games.

A part of me is suspicious of this study. It seems, in a way, as though they are trying to prove that these video games are bad—and yet it’s common knowledge that the amygdala is affected when we feel ANY strong emotion. No one took a brain scan of me after I stubbed my toe yesterday, but I’ll bet it would exceed the red area of the kids who played these games.

I feel like a bit of a hypocrite telling my sons not to play violent games when I write violent books. In my first mystery, which was labeled a cozy by many reviewers, a woman died when a lit torch was thrown into her car. A man was shot at close range. Another woman was shot through her screen door. None of this violence was gratuitous, in my opinion, but what if a study was conducted about mystery writers and their amygdalas? Would we all be told to stop writing violent books because it could warp us as human beings? If so, it’s probably too late.

When my brothers were kids, they didn’t have tons of violent toys. They made up for this by creating violent games. In one game, which my brother Bill called “Stalk,” they pretended to be carnivorous jungle creatures seeking prey. In another, which was merely called “Tackle,” the brothers yelled “Tackle!” at the top of their lungs, and this was a sign that little sisters should run away, screaming, if they didn’t want to be pummeled into the ground. Those boys had plenty of violent imaginings and they worked them into their games.

Violent video games, although more visual, seem to me to be the technological equivalent of the “Stalk” instinct. People like my brother grew up, learned to design software, and said, “What would boys (and many girls) like to play?” They are tapping into the basic human desire for conflict.

As a final note I must admit I have not seen the MOST controversial violent games, and I wouldn’t buy them for my sons. The games they have contain plenty of violence, and it seems to be enough to satisfy the flow of testosterone.

At the end of the day, though, my sons are still willing to sit next to me, put an arm around me, and say “I love you.” I am watching carefully for any signs of antisocial behavior, but so far they seem like really nice people. It just so happens that after we hug, sometimes they go back to thinking about killing Winston, and I try to think up another murderous plot. But try not to judge us by our amygdalas. If the truth were to be told, I think violence finds its way into every human life—I’d prefer that ours be mostly in our imaginations.

Julia Buckley
Posted by The Stiletto Gang at 6:00 AM