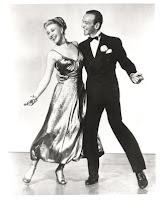 A confession. I watch Dancing with the Stars…religiously. I've never had any interest in other reality shows. I've got zero interest in camping out with strangers for a month even to win a million dollars on Survivor. My idea of roughing it is a motel without room service.

But, in a little corner of my mind, I can see myself gliding across the floor in the arms of a tall gentleman in white tie and tails performing a Viennese Waltz.

Some critics say Dancing with the Stars is just another boot camp for D list stars, willing to boogie their way back into the limelight. Maybe. But the amount of work is ferocious, learning one, and now that the season is moving towards the finale, two routines per week. The way I see it, if you're on the D list and manage to make it to the final Dancing four, you've earned a promotion to the C list at the very least.

I wasn't surprised, but slightly saddened, by the elimination in the last two weeks of Priscilla Presley and Marlee Matlin. 'Cilla is no spring chicken, the grandmother of two, soon to be three kiddies. And Marlee, while considerably younger, is also past the traditional Hollywood babe age.

But there they were, kicking up their heels, Cilla performing a split for goodness sakes – and enjoying the prime of their lives. Whatever they had done and achieved in the past, and it's been significant for both, they are continuing to challenge themselves in the second act of their lives.

Which got me to thinking of how Dancing with the Stars and Evelyn David have a lot in common. (Buckle your seatbelts, this may be a crazy ride.) To be deliberately vague, let's just say that when we wrote Murder Off the Books, neither half of Evelyn David was eligible for a student discount at the movies. Just to be clear, however, we weren't eligible for the senior citizen early bird special either. But one of the best parts of the success of our book is that it has opened a new chapter (pun intended) in our lives. Rather than buy a red convertible and find some new arm candy to deal with any mid-life crises, we wrote a mystery. Then we learned a whole series of new "routines," like promotion and public speaking. We discovered that our second act is as exciting, challenging, and fulfilling as anything that we've done before.

Email ThisBlogThis!Share to TwitterShare to FacebookShare to Pinterest
Labels: Dancing With The Stars, Evelyn David