Death Will Get You Sober 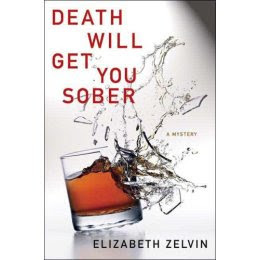 Today Evelyn David interviews Elizabeth Zelvin, author of Death Will Get You Sober (St. Martin's, in bookstores April 15). Liz's story, "Death Will Clean Your Closet," has been nominated for an Agatha award for Best Short Story. The story appeared in the anthology Murder New York Style and is available as a free download on Liz's site, http://www.elizabethzelvin.com/.

Your journey to published author has had a lot of twists, turns, and detours. What gave you the impetus to keep moving and writing?

I had dreamed of getting a novel published for too many years to give up at this late date. I first said I wanted to be a writer when I was seven years old—about a hundred years ago—so I’ve had a lot of practice. Of course there were moments, still are, when I look at my work and think it’s no good. I think every writer has them. But there are more moments when I knew that there were readers out there who’d enjoy what I had written, if I could only find that elusive agent and publisher. Death Will Get You Sober was always meant to be the first of a series. Once I’d written it, my protagonist Bruce and the other characters, especially Barbara, the codependent addictions counselor, kept making clever remarks in my head, so I had to keep going.

Recently, there was a lengthy discussion on a mystery listserve about humor in whodunnits. Some love it – others don't want to mix mirth with murder. Death Will Get You Sober features a recovering alcoholic – any laughs for such a serious subject?

I think Death Will Get You Sober is hilarious. Not everybody will agree, but I bet that people in recovery will. I didn’t create the humor. It was already there. There’s a lot of laughter in AA meetings. Recovery is all about getting honest about yourself, and for that, you need a sense of humor. Alcoholism is serious. Our society tends to think of certain kinds of drunkenness as funny. I don’t agree. But recovery can have a lot of fun in it, and that’s what I wanted to convey.

What do you know now about writing and publishing that will make a difference for subsequent books?

I made a lot of mistakes that people warned me about, but it took a while for them to sink in. They said, “Don’t send out your first draft, and don’t burn through too many agents right away.” I learned the hard way. My manuscript went through many drafts, and I queried many agents and editors, before St. Martin’s took it. I’m grateful it had time to turn into the book people will read. They said, “Kill your darlings.” In other words, there’s such a thing as too much, even if you’re in love with every clever word or well turned phrase. I had a three-week arts residency at the Atlantic Center for the Arts in Florida in 2006, a paradise for writers and other creative artists. SJ Rozan was the “master artist” I worked with. She said, “Liz, two good lines are enough for any paragraph—you don’t need three or four.” After she said that a few times and my colleagues in the workshop agreed, all of a sudden I could see what needed cutting. Having to put together a reading where you’d get the hook after three minutes also helped me streamline my work.

About publishing: I knew going in that nowadays the writer has to do the promotion, unless you’re a celebrity or a bestseller. Working with St. Martin’s, I’ve been lucky to realize that people at the publisher’s can be enormously helpful if you take the time to learn what they actually do and develop a relationship with them. You may book your tour yourself or hire a publicist, but they’ll make sure the booksellers and librarians hear about you, and they’ll get the books there.

Any special rituals or favorite foods that you need to kickstart your writing?

No. The best writing day for me is one that starts with me stumbling right out of bed to the computer with a scene or sentence or line of dialogue tugging at the inside of my head. Of course, that doesn’t always happen. But when I can get the world to leave me alone—and that includes my husband and my email, both irresistible at times—it can be a morning when the words come pouring out.

Why did you choose to have a male protagonist?

That was sort of an accident. I wanted to write a recovering alcoholic, and I wanted to write someone who nobody would think could possibly be me, which meant a man. But I took it for granted I’d have a female voice as well. So I originally had two protagonists, Bruce and Barbara, the codependent who loves to help and mind everybody’s business. They alternated chapters as first-person narrators. I got inconsistent feedback: some agents and editors had no problem with it, others thought it didn’t work. One or two wanted me to throw Barbara out, one at least wanted me to get rid of Bruce. Then the first editor who saw the manuscript at St. Martin’s told me he thought Bruce made a terrific protagonist but Barbara would do better as a sidekick. First I thought, “I can’t.” (My husband says my process always starts with, “I can’t,” and he’s probably right.) Then I thought, “St. Martin’s! This could be my shot.” So I rewrote it, and the editor was absolutely right. It made Bruce stronger and Barbara, oddly, more endearing. And that’s the book St. Martin’s took.

Which camp are you in? Long-hand or computer?

Keyboard all the way. I was a poet for thirty years before this turn to mystery, and I never wrote a poem that was a “keeper” in longhand, even when I used an old Royal manual typewriter, long before computers. I love writing on the computer because I can type faster. I was always a crackerjack typist, but I think fast too, and it’s good that my fingers can always keep up. As I get older, I’m sometimes afraid I’ll forget my best lines before I can get them down. It’s happened! But I usually carry a little digital recorder in places I can’t type, like when I’m driving or running around the Central Park reservoir.

Success as a mystery writer came later in life for you. How did being older influence you as a writer?

Oh, all those books in the drawer! The three mysteries from the Seventies, completely outdated now. The book about my first marriage—thank heaven that never got published. Mainly, it’s not so much that I became a better writer, though I certainly became a better editor. And in the course of writing Bruce, I’ve found my voice, which is something I believe you can’t fake or force. But what I have to say owes everything to life experience and whatever wisdom advancing age has brought me. I might not even want to read the novel my 24-year-old self might have written today.

You seem very comfortable online. In your other career as therapist, you have an online therapy and counseling site, www.LZcybershrink.com . Why should writers establish an online presence?

I wouldn’t say “should.” In fact, it’s a word I almost never use. I’ve said in a professional context that online therapy is for those who love it, both therapists and clients. I think the same is true of cyberspace in general. I’m no techie. My family is still astounded that I can not only use a computer but am at it all day long in both my “hats” as therapist and writer. I’ve been seeing clients online since 2000 via chat and email, after twenty years in traditional private practice as a psychotherapist and day jobs directing alcohol treatment programs. I made a lot of my mistakes and went through my very gently inclined learning curve with my online therapy site. I was able to put my author site, www.elizabethzelvin.com , together relatively quickly once I got my contract and knew it was time. I already had a webmaster, and I knew what each of us could and couldn’t do. He can program anything so it works across platforms (a concept I didn’t even understand for my first five or six years in online practice), but he can’t write my text or spot a typo. I do my own design too, because I have an eye. I took the photos on both sites (except for the head shots) and did the drawings on the LZcybershrink site.

But the websites are only part of the story. For me, becoming a published writer has been all about networking. And networking is just another word for making friends and, as we say in New York, schmoozing. I love to schmooze! I used to look at authors’ Acknowledgments pages and wonder how they got to know all those other writers they were thanking. Now I know hundreds: in part, thanks to living in New York and belonging to such great organizations as Sisters in Crime and Mystery Writers of America, but also because of the amazing online community of not just mystery writers but also mystery lovers of all kinds: readers, booksellers, librarians. I’d never have gotten past the first draft of Death Will Get You Sober without the Guppies, the online chapter of Sisters in Crime for newbies trying to break in—and now, many who have, like me. I love the very different flavors of DorothyL and CrimeSpace. And what I’ve learned from generous pros sharing their experience on the e-list Murder Must Advertise is priceless.

Another unexpected pleasure has been blogging. I’m lucky to belong to Poe’s Deadly Daughters with five terrific blog sisters, fellow mystery writers Sandy Parshall, Lonnie Cruse, Sharon Wildwind, Julia Buckley, and Darlene Ryan. I love the community, and I love the writing, which for me is like being a journalist once a week—a columnist with freedom to write about whatever I want. And most of all, I love saying I have “blog sisters.”

Elizabeth Zelvin
www.elizabethzelvin.com
Posted by Dea, Kia, Jake at 8:00 AM