You may have noticed that the Stiletto Gang has an updated look. We’re celebrating our new logo with a giveaway! Readers who comment on one of the Red Shoes blogs in September and October are entered to win either an Amazon or Starbucks $10 gift card. Join in the fun! The winner will be announced on our November Clicking Our Heels blog.

As a dance lover with a former ballerina as a main character, for me there is only one pair of red shoes that matters - The Red Shoes, a classic British film starring Moira Shearer. 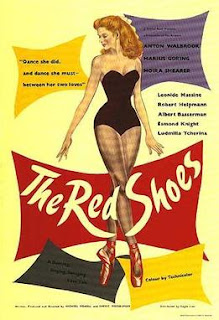 I’ve always had mixed feelings about the film but a recent viewing revealed how well the film has aged. The Red Shoes has even more to say now than when it was first released to great acclaim, two Oscar wins, and several nominations in 1948. Directors as different as Martin Scorsese and Brian De Palma have named the film one of their favorites. If these directors of some of the grittiest, hardest hitting films of all time declare a ballet movie one of their favorites, there must be something more to it than a simple backstage drama.

The film is based on Hans Christian Andersen’s fable about a girl who yearns for dazzling red shoes she sees in a shop window. The shopkeeper gives them to her, but they are no ordinary shoes. She begins to dance, but discovers that she cannot stop dancing. The girl dances across fields, across cities, for days, exhausted, bruised, terrified by what’s happening because no matter how she tries, she cannot take off the enchanted shoes, cannot stop dancing. She begs a woodcutter to cut off her feet. He complies and she’s finally freed of the cursed shoes but at a terrible cost.

The directors of The Red Shoes used the fable as a springboard to an emotionally sophisticated and rich story. By setting the fable in the world of theater, the film’s central motif, the shoes, become a symbol for the artist’s gift.

The film centers around Vicky Page, a gifted young dancer. When she meets charismatic Boris Lermontov, a dictatorial ballet impresario, he asks her why she dances.
“Why do you live?” she responds.
We meet Julian, a young musician whose music has been plagiarized by his music professor. Boris asks Julian to compose music for a ballet version of The Red Shoes. With Vicky in the starring role the ballet is a sensation and Vicky is hailed as a great new talent at each stop on a glamorous European tour.

Two beautiful young people, each gifted artists, each passionate about their art – you can guess what happens next. Vicky and Julian fall in love.

Against the pleadings of Lermontov, Vicky marries Julian and returns to England, leaving her career behind while Julian’s star rises.

But the pull of dance is too great. Vicky goes to visit her aunt in Monte Carlo, just as the ballet pulls into town. Lermontov begs her to return to the stage. She does. Did Vicky really simply wish to visit her aunt or did she intend to meet Lermontov? The film suggests but does not tell.

Just as she is preparing to take the stage for a revival of The Red Shoes, Julian storms in, begging her to return to England with him. Lermontov offers a counter argument, begging her to see that she is an artist, that she is born to dance. Vicky, forced to choose  between the man she loves and the art that keeps her alive, is torn from reality. As if her own red shoes are enchanted, she begins to dance, and….

I don’t want to give away the ending, because this film is so enjoyable on so many levels. The directors hired a painter to be in charge of art direction - it's one of the most gorgeous, color drenched, Technicolor films ever. The costumes by French house of Fath are spectacular. But most importantly, the film has surprisingly modern things to say about art, artists, and relationships.

Do yourself a favor and rent it. The Red Shoes raises so many issues about the nature of art and the sacrifices artists must make to honor their gift. It’s the perfect film, and the perfect shoes, for a group of writers who understand Vicky’s answer to Lermontov’s question.
Why do you write?
Why do you live?

Have you seen The Red Shoes? What do you think of Vicky’s situation? And what about those costumes?
Remember, if you comment, you are entered to win a gift card.

Shari Randall is the author of the Lobster Shack Mysteries from St. Martin's Press. Book One, Curses, Boiled Again, has been called "Delightful! A fun whodunit full of New England coastal charm and characters who feel like friends. Warm humor, a delectable plot, and clever sleuthing will keep you turning the pages."