Through the Evil Days - Julia Spencer-Fleming

The Stiletto Gang is delighted to welcome Julia Spencer-Fleming!  We are huge fans so this guest appearance has us all a-twitter...if you haven't checked out Julia's books featuring minister Clare Fergusson and police chief Russ Van Alstyne, now's the time. Through the Evil Days, the seventh in this fantastic series, is on sale this November. 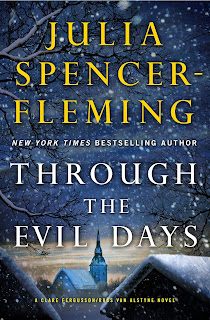 Dos and Don'ts of blending Mystery and Romance

I clearly remember the moment when I realized that the romance subplot/second story of my mysteries had become the plot/primary story: I had just given a talk to an enthusiastic group at a bookstore,  detailing how I work out the twists and turns of the murder, how I use the harsh weather and rural landscape to echo conflicts within the book, how the crimes highlights social issues I feel strongly about. The it was time for questions. A well-dressed woman's hand shot up. “What I want to know is,” she stood up for emphasis, “when are they going to Do It?”

The tradition of including a romance within a mystery goes way back – who among us hasn't swooned when Peter Whimsey finally got his proposal to Harriet Vane right: “Placetne, magistra?” “Placet.” Or when Deborah Knott finally realizes Dwight Bryant has been waiting for her for years. Or when art thief John Smythe, battered and bruised, admits his love for art historian Vicky Bliss? Can you recall the crimes in Gaudy Night, Rituals of the Season and Trojan Gold? I can't. But, boy, I remember those scenes.

So what have I learned in seven – soon to be eight – books about the tortured, tempestuous relationship between Episcopal priest Clare Fergusson and chief of police Russ Van Alstyne? Glad you asked. Let me share with you my dos and don'ts of blending the genres:

DO take advantage of the long story arc. In a straight-up romance, the hero and heroine need to find their “Happy Ever After” by the end of the book (in the same way that the mystery has to be solved at the end in crime fiction.) But in a series, readers get to follow the couple, sometimes for years, as they get to know and love each other. When Russ and Clare meet in In the Bleak Midwinter, he's contentedly married and she's a brand-new cleric in a brand-new parish. How they struggle and resist and succumb to their feelings becomes a story that spreads out over seven books (and counting!)

DON'T play it safe. There's a lot of crime fiction where the amateur sleuth meets the detective in book one, dates him in books two through four, is engaged in book five and married by book six. Their big conflict is usually that she's nosy and he's overprotective. Nice enough, but it doesn't tend to make the heart race. A good romance has complications and obstacles and hurdles galore for the lovers. In Hank Phillippi Ryan's Jane Ryland books, her eponymous heroine and Detective Jake Brogan are passionately in love right from the start. But if he's dating a reporter, he'll be suspected by the department anytime anyone leaks a story to the press. And if she's dating a cop, her hard-won career as a crime reporter becomes tainted be perceptions of favoritism. They literally can't be seen together. But they yearn to be together! What to do? Obviously, you have to keep reading to find out.

DO use danger as an aphrodisiac. In Out of the Deep I Cry, Russ and Clare are locked in the pitch-black  cellar of a derelict building. They have no weapons, no phone and the place is flooding with freezing cold water. (It sounds a little bit like the Perils of Pauline as I describe the scene, but trust me, it works.) Isolation and the fear of imminent death break down their barriers and they kiss. Who wouldn't? If the hero and heroine are going to be rubbing shoulders with bad guys and putting themselves in harm's way, take advantage of it!

DON'T mess with reader expectations. When someone picks up a mystery, she has a reasonable expectation that there's going to be a crime (usually a murder) a series of clues, and a solution. When someone reads a romance, she has a reasonable expectation that there will be a couple, they will change and be changed by each other, and they will reach a Happily Ever After (or at least a Happy-For-Now, with an option to upgrade.) There's not much more disappointing than getting to the end of a mystery and not learning Whodunnit. Or how. It's equally infuriating to root and cheer for a couple only to have one of them die or leave town at the end. Elizabeth George, I'm looking at you, here.

DO It. When readers have anguished and yearned and hoped along with a couple for two, four, six books, they want to experience the payoff. You don't have to have a play-by-play book with diagrams, but let's see a few fireworks! Readers want to experience the big emotions in the other parts of the characters' lives – anger, frustration, triumph – so it's natural to want to be there for one of the biggest emotional events of all. And, after all, unlike killing someone, it's something most of us have actual experience with...

Julia Spencer-Fleming's New York Times bestselling books have won multiple awards, including the Anthony and Agatha, and have been Edgar and RT Reader's Choice nominees.  The next Clare Fergusson/Russ Van Alstyne novel, Through the Evil Days, comes out on November 5th. You can find Julia at her website, her readerSpace, on Facebook and on Twitter as @jspencerfleming. She also blogs with the Jungle Red Writers. 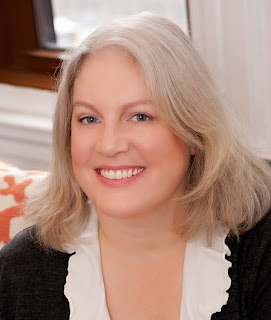