I May Have Put a Curse on Someone


By sheer accident, I overheard an interaction between two strangers a while back that may have led me to inadvertently put on a curse on one of them.


The last time I went to see my oncologist, who’s at a hospital in a suburb an hour’s drive from my house, was the first time I’d driven so far by myself in months (after the whole broken-right-wrist thing). When I came out of the cancer clinic, I decided I’d go to the Barnes & Noble in the shopping center across the street to see if I couldn’t get my wrist and knees to hurt less before beginning the long trip home.


Getting out of my car in one of the handicapped spaces (I have a placard), I saw a lean guy in shorts, late-thirties or early-forties, confront a very heavy woman who’d left B&N and was opening the door of her car in a handicap space several cars up from mine. He yelled at her, “You fat, lazy bitch. Getting your doctor to give you a placard just because you’re too lazy to walk and too undisciplined to curb your urges to stuff candy in your mouth all day. You’re running up everyone else’s health expenses. We’re having to pay for your lazy gluttony.” The woman stared at him with wide eyes like a deer caught in the headlights, began to cry, got in her car, and roared off, while the guy stood there watching, satisfied.


As I said, these two were both strangers to me. I knew neither one’s name. But I recognized the woman. She goes to the same cancer clinic I do. As happens in such places, I’ve overheard bits of conversation between her and other patients she knows or the nursing staff in the chemo infusion lab or between rooms (I’m a novelist—I observe and eavesdrop—shoot me), so I knew that she had a different kind of cancer from mine, that it had been very advanced when it was found, that she’s been battling it for years now and gone through surgery, radiation, and five or six bouts of chemo already. I knew she had gone through years more of pain, nausea, fatigue, depression, you name it, than I have. I knew she had dealt with pain in joints and muscles so intense that it brought tears to your eyes walking from one part of the house to the other. I knew she had probably had long periods where she only got a couple of hours of sleep at night. I knew she had dealt with fatigue so overwhelming that she would have days when just getting out of bed was a triumph, when she couldn’t summon energy to talk or would nod off sometimes in the middle of a conversation. I knew she took meds that did all kinds of horrible things to your body, like eat your bones or put on pounds, no matter what you eat or how you try to exercise, or cause swelling in your face and body.


My feeling was that if she’d consoled herself during one of these times with more chocolate than she should have, so be it. Not anyone else’s business. Because take it from someone who’s dealing with just a little of what she’s had to deal with for years—there is no amount of chocolate that’s too much when you’re facing that kind of shit.


I’m on a cane and moving very slowly—because of those meds that cause so much joint/muscle pain, fatigue, and weakness—so I wasn’t able to get over there before she was in her car heading out, but when I did, I turned to this guy who looked so swollen with self-righteous indignation and found myself pointing my finger at him, something I never do because my grandmother warned me against it as a child. I may have yelled, but since this med makes me weaker in all my muscles, my voice is not as strong as it once was. “I hope you someday truly understand what it’s like to have physical problems that make you sedentary and gain weight, to have lupus and fibromyalgia and rheumatoid arthritis and multiple sclerosis and Parkinson’s and all the other things people have to deal with every day. May you someday understand what it’s really like to deal with cancer.” A couple of people had stopped walking through the parking lot and were staring, so he just shook his head and took off running, yelling, “Another fat, lazy bitch.”


This is the most egregious case I’ve encountered of what I’ve started to call “health bullying,” that I’m seeing more and more often lately. Whether it’s gluten-free, vegan, nightshade-free, or various supplements or special diets or special kinds of exercise, some people seem to feel the need to prescribe for people they know or even don’t know. I remember when my youngest was a teenager and recently diagnosed with ulcerative colitis that had almost killed him from internal bleeding. They pumped blood into him round the clock for over a week and powerful IV steroids that put him into induced diabetes that left him injecting insulin for a year. Once he got out of the hospital, he had to continue taking steroids that puffed him up like the Michelin Man. Someone tried to say he just needed to walk a little and eat more fresh fruits and vegetables. Common sense, yes? He had no car and already walked more miles a day than they probably did in a week, even including the treadmill. He had a long list of foods he was forbidden to eat because they would cause the internal bleeding to start again, and at the top were those fresh fruits and vegetables. I won’t even start on all the folks who think they know how to cure cancer, and I have to tell them that my doctors and I are working on that, thank you very much.


I decided a tough broad like me didn’t need to rest before driving home and made it fine. Could hardly walk to get inside my house, but I made it. I started to feel bad about what I’d said to the guy. I just wanted him to think outside his selfish box for a minute and understand what others might be going through, but I began to realize that, instead, I’d probably placed a curse on him. Because this guy was totally deficient in empathy, and empathy is the only way to understand how someone else might feel—unless you experience the exact same thing. I’m sorry about that. I didn’t mean to do it. I hope he’s only going to get one of those diseases and not all of them. 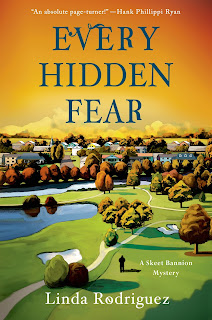 Sorry I'm so late getting back to everyone, but today was another doctor's appointment, so I've been gone all afternoon.

Pam, thank you for the hugs and prayers. I can always use them.

Thank you, Kathy and Marilyn!

Judith, I really didn't mean to.

Kathy, both of them did. Yay!

Ritter, you are so right about all three.

Doward, I try to avoid physical violence because the cancer meds increase irritability and I might accidentally kill someone.

Thanks, Mary. I know allergies must be awful. That's one load I don't have to carry, and for that, I'm very grateful.
Posted by Linda Rodriguez at 12:30 AM