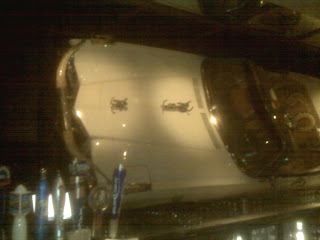 Some enchanted evening
You may see a stranger,
you may see a stranger
Across a crowded room
And somehow you know,
You know even then
That somewhere you'll see her
Again and again.
My vacation was a roaring success. Highlights included a weekend in Napa (didn't I say that with élan?); 24-hours in Vegas where I won $30; a visit to Alcatraz and the Walt Disney Family Museum (how's that for contrast); and maybe best of all, the opportunity to see (although not formally meet) Ms. Pearl of the Soak & Spin Laundromat. You remember Ms. Pearl, the devoted owner of Leon, the adorable English bulldog? The four-legged star of our Brianna Sullivan series? Leon with his delicate digestive tract, who can clear a room when he's ingested one too many beef jerky treats?

But back to Ms. Pearl. Hubby and I had driven from Las Vegas to Bakersfield, California. It's a long, dusty, not-particularly interesting drive, but the perfect stopping point before beginning our West Coast adventure. We arrived at our hotel, located in an area that was an interesting mix of commercial and tacky. In one direction was The Tease and Please, a strip joint; in the other was The Second Amendment, a gun shop and firing range. I'm a fiction writer, but I couldn't make this stuff up.

Where to head for dinner? I scoured the Triple A Guidebook and discovered a gem – Buck Owens Crystal Palace. Buck was one of the original hosts of Hee Haw. He had lived in Bakersfield and decided to build a museum/dinner theater in his hometown. While Buck died in 2006, the Buckaroos, his back-up band, continue to play the Crystal Palace on Saturday nights. We quickly made reservations for dinner, with the assurance that we could stay to hear the Buckaroos for a $5 cover charge.

The museum, filled with Buck's memorabilia, was actually just a series of exhibit cases that lined the walls of the dining room. It took me several minutes to realize that Buck's "Nudie" suits, which looked to me like the usual TV faux-cowboy sequined numbers, were actually just a brand name, although why the name was chosen remains a mystery. The highlight of the museum is Buck's Cadillac Convertible mounted over the bar.

Dinner consisted of chicken fried steak for hubby (with a Maalox chaser), and a rib eye steak for me. The real fun began when the Buckaroos took the stage. With the first note, the dance floor was flooded with couples eager to line-dance to the country beat. That's when I spotted her. The embodiment of the character I had been writing for months. She was 70-something, dressed in a tight red sweater, denim swirl skirt, cowgirl boots, and a long grey pony tail, that bounced and flounced as she moved effortlessly from one side of the dance floor to the other. Her partner was her age, dressed in jeans and a plaid shirt, and tried valiantly to keep up as best he could, but he was no match for my vision of Ms. Pearl and her perfectly-timed taps and kicks.

As a writer, you try to create believable characters. Sometimes they're grounded in reality; sometimes made up out of whole cloth. Ms. Pearl was a figment of my imagination. And yet, there she was on the dance floor of the Crystal Palace. I looked around for Leon, but dogs aren't allowed in the museum. Didn't matter. I knew he was waiting patiently for Ms. Pearl to return, maybe with a doggy bag just for him.

Ms. Pearl and Leon are featured in the newest Brianna Sullivan e-book mystery, Lottawatah Twister, now available at Amazon, bn.com, and Smashwords. You can also catch up on the series beginning with the first book, I Try Not to Drive Past Cemeteries (although truth in advertising, Pearl and Leon make their first appearances in book 3).

I loved my vacation, hated flying (as usual), and am thrilled to be home, back at my computer creating murder and mayhem.

BREAKING NEWS!!!! Lottawatah Twister, the 6th volume of the Brianna Sullivan Mysteries was published on July 16, 2011!  See links below for purchase at Amazon, BN.com, and Smashwords. Lottawatah Twister is the sixth book in the Brianna Sullivan Mysteries ebook series. A novella-length story, Lottawatah Twister continues the spooky, yet funny saga of psychic Brianna Sullivan who planned to travel the country in her motor home looking for adventure, but unexpectedly ended up in a small town in Oklahoma. In Lottawatah Twister, a powerful tornado wreaks destruction on everything in its path and stirs up some unsettled ghosts. It's up to Brianna to figure out whodunnit before the killer strikes again. Leon, the adorable and digestively-challenged bulldog, is back at the center of the action and more than once saves the day – and the beef jerky. Brianna is forced to answer a question that she's avoided since the day she arrived in Lottawatah: why is she sticking around? Lottawatah Twister has more twists and turns than a funnel cloud, with humor to make you laugh out loud and a romance that will touch your heart.