Enjoy this excerpt from the up and coming Dressmaker's Mystery,

Pleating for Mercy, from NAL, September 2011 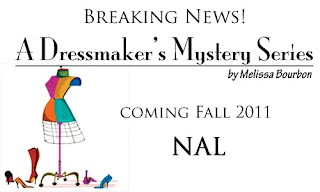 My great-grandmother, a feisty firecracker of a women named Loretta Mae Cassidy, had a way of getting just what she wanted. Whether it was a copy of the Sunday newspaper delivered right to her doorstep, a sneak preview of the newest arrivals at the big chain craft and fabric store in the neighboring town, or me, back in Bliss, Texas, you could lay money down that if she wanted it, it would happen...one way or another.

Yes, what Loretta Mae wanted, Loretta Mae got. The fact that she’d passed on six months ago hadn’t changed that. If you asked anyone in Bliss if they felt it was strange that Loretta Mae was still getting what she wanted, even though she’d gone to a better place, they’d say, “Heck no, that ain’t strange at all. You’re talkin’ ‘bout Loretta Mae. She’s a Cassidy, and those Cassidy women have always been a little touched, if you know what I mean.” And then there’d be a not-so-subtle wink because, of course, everyone in Bliss knew that every woman from the Cassidy family tree was, well, not insane like being ‘touched’ implies (the old timers in Bliss who kept this story alive tended to exaggerate), but just a bit...charmed.

We all had small ‘gifts’ that are, shall we say, inexplicable. But we’d all worked hard to stay on the down low. We didn’t want our own contemporary Texas version of the Salem Witch Trials.

I was the exception to the rule as I didn’t know what my gift was. Like every Cassidy from the beginning of time--or the beginning of Texas--whichever came first--Loretta Mae, who I’d always called Meemaw, was born and raised in Bliss. And she’d hated that I’d left. “Mark my words, Harlow Jane Cassidy. You can take the girl out of Texas, but you can’t take Texas out of the girl. What’s in Los Angeles that’s not in Bliss?” she asked when I announced that I was moving to California.

“A college with a degree in fashion design,” I said.

I saw the skepticism in her liquid blue eyes which were the mirror image of my own, but she kept quiet.

“What’s in New York that’s not in Bliss?” she asked after I’d left L.A. and moved into a rundown walkup in Manhattan, but her eyes had turned cloudy and she looked puzzled, as if her world had been shaken. “You’re chasing something you already have,” she added, as if I were Dorothy and only had to click my heels together three times to realize I already had the success of Stella McCartney.

She hadn’t gotten what she’d wanted then--me, back in Bliss--but I was here now. The old farmhouse just off the square at 2112 Mockingbird Lane looked different with my things added to what I’d kept of Meemaw’s. I lived on one side of the house and I’d turned the other half into my dressmaking studio and boutique. Buttons & Bows. The name was a tribute to Loretta Mae. Her collection of old buttons, bows, and ribbon took up an huge section of the attic. I’d spent a whole day marveling at the sheer volume of the collection, ignoring the rest of the attic, the one area of the house I hadn’t tackled. It stretched nearly the entire length of the house and was filled with a century’s worth of stuff. The discarded furniture and boxes could wait, but the antique buttons and ribbon, cording and lace?

I’d spent my first weeks back in Bliss working on the house and visiting my family. My grandparents lived on a ranch on the outskirts of town. When I’d gone to visit, I’d found my granddaddy in the house. He’d grumbled, his silver hair tousled, his cowboy hat falling from his paunchy stomach to the floor as he shook away his sleepy fog. We played a game of gin rummy before his eyes started drooping again. Back in his recliner, he said about my grandmother, “She’s out with her goats,” and then he sank back into his dreams.

I’d found Nana in the barn tending to a premature kid who’d been born to a feisty goat. The mama goat didn’t want anything to do with her offspring so Nana was nursing it. “Happen across anything interesting in the old house?” she asked after a while.

I sat beside her as she fed the tiny goat from a baby’s bottle. I knew what she was really asking. “They don’t exist, Nana. That story’s nothing but legend.”

She stared at me like I’d gone and smacked the goat upside the head. “That story is fact.”

“It’s not fact. There’s nothing to prove it.”

“Yes there is, and it’s right under our noses.”

I shrugged. There was no point arguing with her. “Well, I haven’t seen anything.”

She huffed, batting a buzzing fly from its flight path around the kid’s face. She tilted her chin up and peered at me from under the rim of her tattered straw cowboy hat. “You listen here, Harlow Jane,” she said. “Butch Cassidy was your great-great grandfather. You carry his name, for pitty’s sake. We all do, no matter who we marry. Cassidy is who we are and don’t you never forget that.”

I’d heard the story a million times, but most of the time I thought it was pure fiction. “My great-great grandmother really rode with him?” I asked, as if I hadn’t posed the same question a hundred times over the years.

“She did, and she robbed her share of stage coaches,” Nana said. “Even a train in Colorado, I believe. Cressida Harlow, your namesake,” she added, as if I could forget I was named after a bandit and his alleged bride, “only stopped when she got pregnant.” The goat squirmed in my grandmother’s arms. She hunched over it, whispering in its ear until it stilled and began lapping at the oversized nipple on the bottle.

“But he died in Bolivia,” I said, skipping ahead in the story, but leaving out the fact that Cressida and Butch’s daughter, Texana, supposedly received a letter and some trinket from her father long after he’d supposedly died in South America.

Nana shook her head. “No!” The kid detached from the bottle and bleated. Nana gave me the stink eye as she spoke softly to the baby goat. She was a goat whisperer. That was her gift, not that it had served her any over the years. But it was what she did. She was like the pied piper of goats. “Sorry, my love.” After the kid quieted down and went back to the bottle, she said, “Your great-great granddaddy faked his death. He came back to the states. Settled in Washington.” She gestured with her hand, dismissing that part of the story. “Don’t matter where he lived. Only that he did and that he sent that letter to his daughter Texana and she passed it on to her daughter. Loretta Mae,” she added in case I’d forgotten the family lineage. “God a’mighty, I pray Meemaw didn’t go off and hawk it, or somethin’. Her mind was pretty loosy goosy at the end.”

Later, as I sat in my workroom, hemming a pair of slacks, I thought of all the places Meemaw could have hidden a letter. A million, I decided. She was a clever old woman and she’d gone to her grave with the secret--if there was one--and it was likely we’d never know the truth.

I’d taken to talking to my great grandmother during the dull spots in my days. “Meemaw,” I said, “I wish you were here.” I had so many questions, and had missed so much being away from Bliss for the last fifteen years.

A breeze blew in through the screen, fluttering the butter yellow sheers that hung on either side of the window. A small part of me wondered if Meemaw could hear me from the spirit world. She’d wanted me back with her, after all. Was it so farfetched to think she’d be hanging around now that she’d finally gotten what she’d wanted?

Thanks to Meemaw, my life had done a complete 180 in the blink of an eye. Three months ago I’d been in New York helping to develop couture designer Maximilian’s low-end line. Now I had my own shop. What had been Loretta Mae’s dining room was now my cutting and work space. My five year old state of the art digital Pfaff sewing machine and Meemaw’s old Singer sat side by side on their respective sewing tables. An 8 foot long white-topped cutting table was pushed up against the wall, unused as of yet. High on my list of things to buy was a dress form. I’d never owned one since they’d been supplied by the design manufacturers I’d worked for. Now that I was on my own, I needed one.

I pulled a needle through the pant leg. Gripping the thick synthetic fabric sent a shiver through me akin to fingernails scraping down a chalkboard. Bliss, Texas was not a mecca of fashion; so far I’d been asked to hem polyester pants, shorten the sleeves of polyester jackets, and repair countless other polyester garments. No one had hired me to design matching mother and daughter couture frocks, create a slinky dress for a night out on the town in Dallas, or anything else remotely challenging or interesting.

“If things don’t turn around, I’m not going to be able to pay the property taxes,” I muttered, forgetting for the moment all the reasons I’d thought leaving New York had been a good idea.

A flash of something outside caught my eye. I looked past the french doors that separated my work space from what had been Meemaw’s gathering room and was now the boutique portion of Buttons & Bows. The window gave a clear view of the front yard, the wisteria climbing up the sturdy trellis archway, and the street beyond.

I sighed, disappointed. Whatever it was had gone and all was quiet again. As I finished the last stitch and tied off the thread, the front door flung open. The bells I’d attached to a ribbon and hung from the knob danced in a jingling frenzy. I jumped, startled, dropping the slacks, but clutching the needle.

A woman stepped into the boutique. Her dark hair was pulled up in the back into a messy, but trendy, bun and I noticed that her eyes were red and tired looking despite the heavy makeup she wore. She had on jean shorts, a snap front top that she’d gathered and tied in a knot below her breastbone, and wedge-heeled shoes. With her thumbs crooked in her back pockets and rotating one foot in and out at the ankle, she reminded me a little too much of Daisy Duke--with a muffin top.

Except for the Gucci bag slung over her shoulder. I’d lay money down that the purse was the real deal and had cost more than two thousand dollars, or I wasn’t Harlow Jane Cassidy.

Posted by The Stiletto Gang at 2:15 AM