The Movie or the Book? 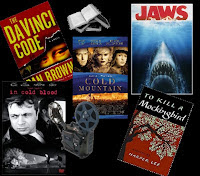 I've always been one to read the book before seeing the movie or television series spinoff; thus I'm usually disappointed in the movie. There have been exceptions of course. A good actor or actress can tip the scales.

My top ten for where the movie or television series was better than the book:
1. Jaws – the cast, the visuals, the music. That was some movie!
2. Lonesome Dove – loved the movie, never made it all the way through the book.
3. To Kill a Mockingbird – the movie was beyond wonderful; the book was merely fantastic. Okay so I love both but I've seen the movie more times than I've read the book.
4. The Client (the movie was one of Susan Sarandon's best roles. Loved the banter between her and Tommy Lee Jones) – The book was good but I didn't care for the television series
5. A Time for Killing – (the movie was better than the book.) The book was one of my least favorite of John Grisham's list. I didn't care for The Firm in either the book or movie version.
6. The Awakening Land (loved the miniseries although Conrad Richter novels are very good)
7. The Hunt for Red October – excellent movie, good book
8. Silence of the Lambs - Jodie Foster is and always will be "Clarice."
9. The Shining (although that's a close call, Jack Nicholson makes the movie stand out.)
10. The Godfather – the cast was perfect.

My top ten for where the book was far better than the movie or tv series:
1. Patriot Games – the plot in the book was much more exciting
2. The Kathy Reich novels – I just can't get into the Bones tv series
3. Jeffery Deaver's Bone Collector series – the books are excellent, the movies are exciting, but not nearly as interesting as the books.
4. In Cold Blood – the book was much scarier than the movie. The book Helter Skelter was also scarier than the mini-series.
5. The Little House On the Prairie books – when the tv series aired I couldn't get over the fact that Mary wasn't blind. Even at ten or eleven I was comparing the show to the books and finding the show lacking.
6. Da Vinci Code – I know some people don't like the book but I enjoyed reading it – the movie not so much. Tom Hanks seemed totally miscast.
7. Contact – I had such high hopes for the Jodie Foster movie and was so disappointed.
8. Cold Mountain – the book was much better than the movie.
9. Jurassic Park – I liked the intricacies of the book's plot best, but I have to admit the movie was exciting. I'll call that one a toss-up.
10. The Stand – couldn't make it all the way through the mini-series. The book was very good.

If you've seen the movie and read the book, which do you prefer? Do you think it makes a difference if you read the book before seeing the movie?

I've always hoped for a movie or tv series from Nevada Barr's books. I can't understand why some producer doesn't see the potential.

Do you have a favorite book you'd like to see made into a movie or tv series? Of course my first choice is Murder Off the Books. My co-author and I would love to see "Mac and Rachel" on the small screen every week. We're just not sure who we'd want to play "Whiskey." Suggestions?

Email ThisBlogThis!Share to TwitterShare to FacebookShare to Pinterest
Labels: Evelyn David, In Cold Blood, Jaws, To Kill a Mockingbird