Party Time or is There a Better Way to Reach Readers?

Party Time or is There a Better Way to Reach Readers? by Debra H. Goldstein

We’re having a Facebook party on Tuesday night (August 18 from 8 to 9 p.m. EST/ 7 to 8 CST) and you’re invited! It’s a Facebook party being hosted by yours truly (Debra H. Goldstein), Julia Henry and V.M. Burns to celebrate our August releases. 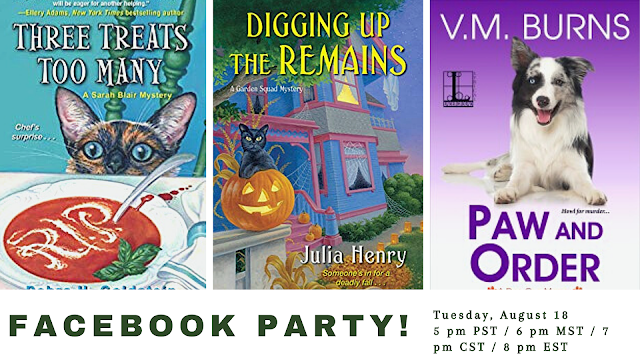 In the past, we’ve each had big launches in our cities, attended conferences, made presentations wherever we were invited, participated in Facebook parties, and done blog tours, but the world and our normal way of doing things has changed. As we shelter at home, avoid group gatherings, visit with friends and fans virtually, we, and other authors, are trying to find the new norm.

We’re writing blogs because we enjoy interacting through the written word– but lately, there have been a rash of articles saying that is passé. These same articles argue that newsletters are the way to go, but not every author enjoys writing and formatting a newsletter and statistically there are only so many newsletters opened per mailing round.

Live conferences which offered numerous panels have been canceled for the foreseeable future and their virtual replacements can only feature a limited number of speakers. Similarly, traditional in store launches are being done as virtual launches or takeovers via store or social media sites. Podcasts have increased in popularity, but again, there aren’t enough guest slots for every author.

Because we are interested in what you think is the best way for us to reach readers, we each are giving away a print or e-book copy of our new book --- just think, leave one comment and you have three chances to win a prize because we will each randomly select a winner for our respective book.

And to remind you about our books:

PAW AND ORDER by V. M. Burns is the fourth book in the Dog Club Mystery Series.

DIGGINGUP THE REMAINS by Julia Henry is the third book in the Garden Squad mystery series.

THREE TREATS TOO MANY by Debra H. Goldstein is the third book in the Sarah Blair mystery series.

We look forward to hearing your thoughts and hope to see you at the party (lots of fun and giveaways).