Wisteria Wars and Creativity in the Time of Covid—by T.K. Thorne 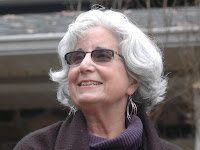 
Most people assume, as a writer, that I'm eating up the hours a little virus has bequeathed to us by WRITING. They would be wrong. Yes, I am working on a novel, but it's in the editing stage. That means I'm calling on some craft skills, but mostly just plain old boring, repetitive checking for errors.
This piece is the first thing I've actually tried to pull from the creativity well, and I have no idea where it will go. But that is okay. I give myself permission to ramble and see if anything worthwhile will arise. (I encourage you to do the same.)  So here we go.

I'm fortunate to live on several acres of property surrounded by beautiful woods. Our nearest neighbors are cows. For the ten years before we moved here, I lived in the city, and tried to grow on a tiny patch of land what I felt was the most gorgeous of plants—a wisteria vine. For whatever reason, the one I planted with hopes of it gracefully climbing the crosshatch wood panel on the side of my front porch and spilling grape-like clusters of blossoms—never bloomed. When we moved, I dug up a piece of the root and planted it in my front yard, determined to keep trying. The ground was so hard, I ended up cutting off most of the taproot and throwing a small piece of it into the woods on the side of my house.

Thirty years later, that little piece of discarded taproot has been . . . successful.  That is like saying a virus replicates. It did bloom, draping glorious purple curtains from the trees. 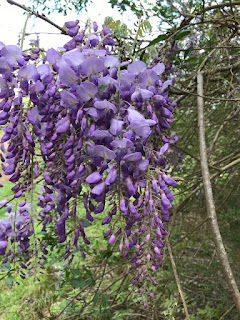 At first I told it, "Okay, as long as you stay on that side of the path." It didn't. Then, I rationalized, as long as it stayed behind the fence in the backyard. (I didn't actually go in my backyard very much, being busy with life stuff.)  But I looked one day after covid-19 hit, and it had eaten over half of the back yard.  I couldn't even walk to the fence line. Two huge trees went down, strangled, and too close to the house.

It was time for war.

This engagement, like those in the Middle East, will never end. Wisteria sends out shoots underground and periodically forms nodes that may change the direction or shoot out its own horizontal and/or vertical roots, so each section can survive independently and pop up anywhere.  Of course, I have the most pernicious variety, the Chinese kind that takes over the world (challenging even kudzu, which fortunately, hasn't found my house yet.)

My first priority was to save the trees near the house. The vines were so thick at the base, no clippers would suffice. I girded myself with a baby chainsaw and determination. It hurt to cut into those old, twisty vines, to destroy something so beautiful, but the trees were more important. I imagined that with each cut, the tree could feel the release from the vine's embrace, the reprieve.  I was taking life, but I was giving it too.

I sprayed the growth in the yard and pulled up (some of) the root systems.  If you want a mindless, exhausting, frustrating, impossible task—pull up established wisteria roots. It will take your mind off anything, even a pandemic.

One side benefit of the fallen trees was that a little more light found its way into the yard, and I decided to try growing vegetables. Another feature of my backyard is an old fashion clothesline with rusty steel posts. Periodically over the past decades, I've thought we should take them down as they are eyesores, but another part of me (the part that worried what young girls with flat stomachs would do during the famine) worried that we would have a pandemic one day or some kind of disaster that would require actually hanging clothes out to dry, so I left them, as well as the abandoned rabbit hutch in the far corner.  We would be ready, if not attractively landscaped.  And worse case scenario, maybe the hutch, in a pinch, would hold chickens.

I thought my creative well was dry, but looking at those old steel posts, the pile of wisteria roots, the vines I had pulled up and cut down, and a package of bean seeds that has been sitting in a drawer for a few years, something started stirring. Beans need something to climb.  One of the fallen trees had taken out actual wire lines of the clothesline, but the poles were set in cement. They will be there when I am dust. The pole surface might be too slick for a bean to be able to curl up, but maybe—
And so, as a product of WWI (Wisteria Wars Episode I) and covid-19, I found that the outlet for creativity isn't always words on a page. If my beans grow, they will be beautiful and feed me, and if they don't, I will at least have a couple of funky art pieces in the backyard.

T.K. is a retired police captain who writes books, which, like this blog, roam wherever her interest and imagination take her.  Want a heads up on news about her writing and adventures (and receive two free short stories)? Click on image below.  Thanks for stopping by!