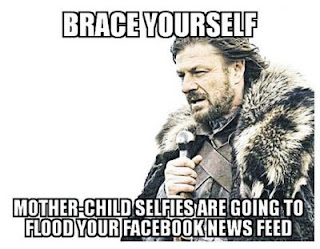 A few weeks ago I mentioned that I was annoyed/amused that everyone was complaining about being forced to live my life (I only got to go to the grocery store!! Wahhhhh!).  But with Mother's Day just past, I'm actually finding this to be more and more true. People are grumpy, unhappy, short-tempered and depressed.  It is exactly as though they've been forced into motherhood without the benefit of having a baby!  They have no idea what is going on, the changes seem daily, someone always seems to be yelling about something, wearing a face mask seems like kind of a good idea, and there is no end in sight, except for possibly 18 years in the future.  Who knew that motherhood would prepare me for a pandemic?

So, in honor of Mother's Day, here is what I've learned from motherhood that will help you through this:


Good luck in your personal pandemic zone.  Take care of yourself.  Remember to breathe.  And of course, remember to read a book.  This week, I have two recommendations.

Shark's Fin - #4 in the Shark Santoyo Series - You can read through the entire series on Kindle Unlimited, grab #1 Shark's Instinct for $0.99 or pick up Shark's Fin today.
Buy now: Amazon

Order from all major retailers: