Noir at the Bar

This week I'm engaging in a local Seattle event called Noir at the Bar.  There are several of these around the country—they're a collection of live readings from crime writers with a few open mic slots at the end.  I don't do crime exactly.  I'm more action-adventure / mystery. If you're wondering about the distinction, I would say that the crime genre usually involves a higher body count and more depression and alcoholism.

A public reading is a difficult beast to master. The story or piece has to fit the time allotted and it has to be satisfying to the audience.  Just reading a chunk of my latest work in progress wouldn't be helpful for the audience. There wouldn't be enough set up and no conclusion.  It's OK to leave the audience wanting more and pondering the deeper meaning.  Leaving them just plain confused and wondering what the point was is not acceptable.  Also, the piece has to be somewhat performed. Simply reading is more than a little bit boring, unless you have a Morgan Freeman voice.  In which case, congratulations, read whatever you want.  But I don't sound remotely like Morgan Freeman, so I have to work a little harder.

For this event I've written a more crime oriented piece involving plastic couch covers, cupcakes and a husband who wishes he hadn't popped home for a nooner.  It's got some rather naughty words and I'm hoping I don't stumble over them.  It's my feeling that if you're going to swear in public you should do it with authority.  Although, I have to admit that while dropping an F-bomb doesn't scare me, but somehow the line about tampons has me intimidated.  Wish me luck! 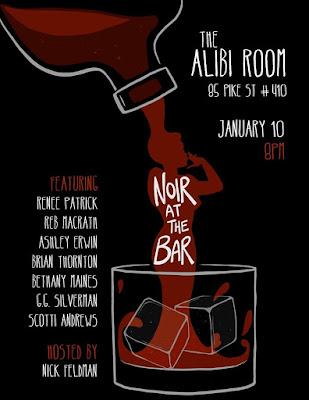 Fresh out of prison and fresh out of luck, twenty-something Shark wants back into The Organization. But when Geier, the mob boss with a cruel sense of humor, sends Shark to the suburbs to find out who’s been skimming his take, Shark realizes he’s going to need more than his gun and an attitude to succeed. With the clock ticking, Shark accepts the help of the mysterious teenage fixer, Peregrine Hays, and embarks on a scheme that could line his pockets, land him the girl and cement his reputation with the gang—if he makes it out alive.