I'm on Mr. Toad's Wild Ride and I Don't Want to Get Off 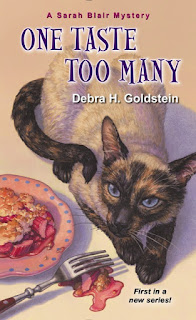 I’m on Mr. Toad’s Wild Ride and I Don’t Want to Get Off by Debra H. Goldstein


In reviews, the book has been called suspenseful, fast paced, and edgier than most cozies. I think that’s because I tend to write a cozy that edges into the traditional mystery. I have the cat, small closed setting, cast of suspects, and murder off the page, but I also have numerous quirky turns and unexpected encounters. As in Mr. Toad’s Ride, where when intellectually I knew nothing would happen, out of a fright response, I put my hand up once or twice to avoid something touching my face or jumping out at me, there are red herrings and twists to keep readers on edge.


From the moment of One Taste Too Many’s launch, it has been a wild ride. Expected and unexpected reviews have been favorable and plentiful, blogs galore have appeared (forty-four plus, but whose is counting?), I had the delightful opportunity to write four blogs with one of my favorite writers, Barbara Ross, comparing our cooking styles (non-existent), settings (North and South), regional food, and showing what might happen if the characters from Steamed Open and One Taste Too Many met, and people have been genuinely kind and excited for me.


There is a lot of work involved with launching a book. I’m not particularly good at juggling PR duties with writing, and while I’m trying to move my work in progress along, I’m savoring every moment of my wild ride.  Thanks for being on it with me!


One Taste Too Many:


For culinary challenged Sarah Blair, there’s only one thing scarier than cooking from scratch—murder!
Sarah knew starting over would be messy. But things fall apart completely when her ex drops dead, seemingly poisoned by her twin sister’s award-winning rhubarb crisp. Now, with RahRah, her Siamese cat, wanted by the woman who broke up her marriage and her twin wanted by the police for murder, Sarah needs to figure out the right recipe to crack the case before time runs out. Unfortunately, for a gal whose idea of good china is floral paper plates, catching the real killer and living to tell about it could mean facing a fate worse than death—being in the kitchen

Email ThisBlogThis!Share to TwitterShare to FacebookShare to Pinterest
Labels: #cats, #cozymystery, #One Taste Too Many, #read, Debra H. Goldstein