Living Under An Assumed Name

Huge thanks to Linda Rodriguez who very kindly offered me her spot this month to talk about my new identity and my new series. Thanks, Linda! 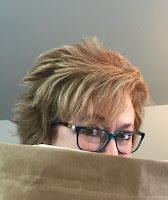 We're all familiar with pseudonyms or the fancier term, nom de plumes. However, I never imagined when I started writing that I'd have more than one pen name. Initially I assumed I'd write under my own name. Instead I have two pen names: Sparkle Abbey, where I'm half of a writing team, and now also, Mary Lee Ashford, where I'm writing a new cozy mystery series for Kensington Books/Lyrical Press.

I'm so excited about this series and it has been such a joy to write on so many different levels. First off, I've read culinary mysteries for years and jumped at the chance to try my hand at one. Also, this series is set in a fictional small town in the midwest and it's been fun to be able to put into the books all the things I love about small towns.

Additionally, for me, it's always about the characters. That's where it all starts. So I've loved the opportunity to develop Sugar Calloway and Dixie Spicer, the not-to-be-stopped ladies who drive the story. Sugar and Dixie have each had some things in their lives that didn't turn out exactly as planned. (Haven't we all?) They are both ready to start a new chapter and are well on their way but then...life throws another curve ball and suddenly they're in the midst of a murder investigation. (By the way, if you're reading this and you're a writer, Linda Rodriguez has a fabulous book on characters: Plotting the Character Driven Novel.) 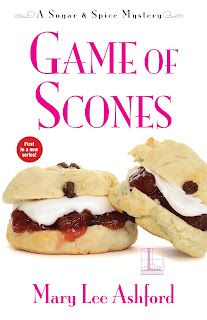 Here's a little bit more about the first book, GAME OF SCONES,  which just came out this week:

After losing her job as food editor at a glossy magazine, Rosetta Sugarbaker Calloway—aka “Sugar” to friends—isn’t sweet on accepting defeat and crawling back to her gossipy southern hometown. So when she has an opportunity to launch a community cookbook business with blue-ribbon baker Dixie Spicer in peaceful St. Ignatius, Iowa, she jumps at the chance to start over from scratch.

But as Sugar assembles recipes for the local centennial celebration, it’s not long before she’s up to her oven mitts in explosive threats, too-hot-to-handle scandals, and a dead body belonging to the moody matriarch of the town’s first family. With suspicions running wild, Sugar and Spice must solve the murder before someone innocent takes the heat—and the real culprit gathers enough ingredients to strike again . . .

The second book in the series, RISKY BISCUITS, will be out in July of 2019. And I'm working on book three right now so stay tuned for more news on that!

GAME OF SCONES is available at all your favorite places to buy books:
Amazon
Barnes and Noble
Kobo
iBooks
Google

If you'd like to stay in touch with the new me (and I hope you do) please visit my website MaryLeeAshford.com and sign up for my newsletter.

Again, thank-you Linda for inviting me to step in on your day to introduce my new series...and my new identity.