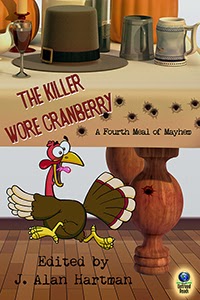 A perfect Thanksgiving Diet has been discovered! No starvation! Not impossible to follow! The Killer Wore Cranberry:  A Fourth Meal of Mayhem guarantees not a pound will be gained this holiday season.

The Killer Wore Cranberry: A Fourth Meal of Mayhem contains recipes from Lisa Wagner and short stories by Big Jim Williams, Lesley A. Diehl, Sandra Murphy, Earl Staggs, Barbara Metzger, Steve Shrott, Rob Chirico, Laird Long, Barb Goffman, and Debra H. Goldstein. I’m thrilled to be in the company of these writers.  Many of them had stories in each of the first three successful The Killer Wore Cranberry books, but three of us are newbies to the series.

Writing my story, Thanksgiving in Moderation, was pure joy with a touch of madness.  The call for submissions required a story that had a Thanksgiving theme and incorporated a Thanksgiving food. Thanksgiving wasn’t an issue, but as you know from my prior blogs, I love to eat and be a dinner guest but I don’t know my way around the kitchen.  Consequently, the first thing I researched was what different dishes are served at Thanksgiving besides turkey.  I was amazed at the possible menu variations.

Living in the South, I gravitated toward greens-especially when I realized “greens” could be any leafy vegetable including spinach, kale, collards, cabbage, broccoli, brussel sprouts, and parsley. Once I had my food, my mind focused on family dynamics. I long ago concluded that no matter how serious a situation is, family dynamics bring humor to it. From that point, the story flowed.  My critique group pointed out a few rough spots and then the story was ready for submission.  I crossed my fingers and looked around for a wishbone. Happily, Jay Hartman’s e-mail accepting Thanksgiving in Moderation granted me two wishes:  inclusion in The Killer Wore Cranberry: a Fourth Meal of Mayhem and a celebratory reason to avoid my kitchen.

The stories in The Killer Wore Cranberry: a Fourth Meal of Mayhem prove laughter is the best medicine by including, as its blurb explains, “what happens when sisters are pushed over the edge, dentists dine with crime bosses, 1950s private detectives deal with dames and sweet potatoes and a family has a bit of a problem with their future son-in-law.”

The anthology is available from The Untreed Reads Store: http://goo.gl/jl7gCO (best discount), from any store or library ordering from Ingram using ISBN 9781611877403, or from Overdrive as a November promotion.  TKWC truly offers a way to enjoy Thanksgiving food without gaining a pound.  Now, put your fork down and read every word of this Thanksgiving short story and recipe anthology.