Rejuevenating by Going to Sisters in Crime meeting 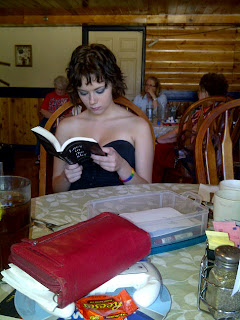 This is Ashley who attends the meetings with her mom and grandma--but spends most of her time reading. She's been coming to the SinC meetings since she was a little girl and often helps out. (She's much younger and prettier than the rest of us.)

I'm one of the founding members of the San Joaquin chapter of Sisters in Crime (Fresno). We've met in many places, usually a restaurant, which is where we meet now.

I don't live close to Fresno, it takes at least 1 3/4 hours to get to the meeting spot from our home in the foothills--but I do try to go to as many meetings as possible. Hubby likes to go too and we took along another Sister. Traffic was horrendous because of the holiday weekend.

We have lots of interesting speakers, some from the law enforcement fields and some are authors who come and talk about their books or give writing tips. (I've been a speaker several times over the years.)

This day Simon Wood and Camille Minichino drove down from the Bay area (San Francisco) to be our guests.

Here are some of the fascinating things they had to say.

Camile loves and thinks in terms of numbers. She knows exactly what % she is in her writing. She displayed a graph that showed exactly where she is now. She creates her characters as a scientist might.

Simon talked about technology and how it can either confine or liberate. He reminded us that a cell phone can do 1000 different things. He recently updated his older books and said it was quite a chore.

He also told us if there is a major event our cell phones will no longer work. He also asked "What happens when all the power goes away?"

Camille talked about Sue Grafton never aging her character or updating technology. Camille also talked about research and finding out how to do things like hacking into email for a plot point. She reminded us that a young character would have the newest "stuff."

She confessed she went into physics because there was nothing to memorize.

Simon said his best friend is Google Earth. He also told us Congress is killing off all the science experiments. The only big one left is the fusion project. 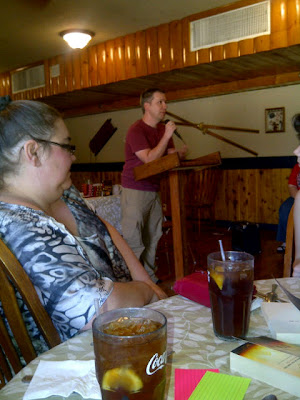 It was a most interesting meeting and despite the drive, I was revved up and anxious to get back to my own writing.

How many of you belong to Sisters in Crime?