I've got two weeks left to finish up THE COUGAR CLUB, and I'm feeling just a tad freaked out. I've been trying hard to say "no" more and travel less so I have more time to write, particularly with back-to-back deadlines these past two or three years. But despite the best intentions, I never end up with as much work time as I'd like. Something's gotta give, and it's usually sleep. That leads to brain fog, which leads to "oops" moments. Take this morning, for example. I had two hours' worth of errands to run before the writing could commence, and I realized as I hit the vet's office to pick up a prescription for a cat that I'd forgotten to enclose a check with a bill I mailed off at the P.O. this morning. Sigh.

For some reason, my tired mind keeps singing, "feelin' brain dead" to the tune of "feelin' groovy" from Sesame Street. That's when you know you're sleep-deprived. At least it's stopped thinking of that stupid FreeCreditReport.com song!

Still it's hard to regret taking time off work to do things like fly to Houston in early April for the Texas Library Association convention (even though I had laryngitis--oy! Can you say "stress much"?). I loved being back in my old hometown, seeing friends, doing a drive-thru 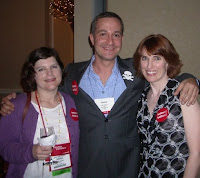 of my former neighborhood which is where THE DEBS series is set, taping a TV interview, signing stock at the lovely Blue Willow Bookshop, and doing an event at Murder by the Book. If I sounded like a croaking frog, oh, well. There wasn't much I could do about it, and everyone was awfully nice though it sure made it hard to schmooze! (Pictured left: Sara Zarr, author of SWEETHEARTS, and Justin Somper, author of the VAMPIRATES series.)

Neither do I regret playing emcee at Lisa Scottoline's appearance on April 21 at the St. Louis County Library headquarters. I'd never met Lisa before, and she's terrific. Just a bundle of energy and a hilarious speaker.

And, my gosh, it would've killed me to say "no" to the St. Louis Komen for the Cure co-chairs, Dede and Kris, who invited me to be guest speaker at the 11th Annual Survivors Luncheon at the Ritz-Carlton on April 26. As a breast cancer survivor, I felt honored that they'd asked me to share my experience with 800 fellow survivors and their friends and family. My husband, my mom, and my mom-in-law accompanied me, and I ran into several pals and met lots of other amazing women. I'd been warned not to make my speech sad, something I wasn't sure how to do anyway. I got through the worst of my boobal trauma by relying on my sense of humor. If you can't laugh through the tears, I don't know how you make it.

I'd never been so nervous before a talk, however, and I picked at my food during lunch (which was a shame because it was delish!). But once I was up on the stage and the lights were 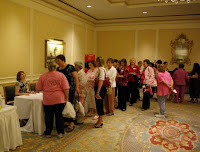 glaring in my face--I mean, those suckers were bright!--the words began to flow and the laughter rang out through the ballroom. By the time I finished, I realized people were on their feet, clapping. It took a minute to grasp the fact that I'd gotten my first standing-O! Wow. I signed books for at least an hour after, and I probably took longer signing than I should have. But I couldn't help chatting with each woman who approached. It's astounding the connection between strangers when you share a bond like surviving breast cancer. I felt like I'd been embraced by some of the nicest people in the world. For all the luncheon ladies who said I inspired them, let me tell you, they inspired me, too.

No more outside events until next Friday when I speak at the Young Authors Conference downtown to St. Louis Public School students. No matter the interruptions, I keep telling myself to FOCUS and get THE COUGAR CLUB done by May 15. (I think I can, I think I can!) And if that fails, I remind myself that I finished TOO PRETTY TO DIE and wrote THE DEBS entirely while going through my surgery and radiation therapy in late 2006 and early 2007. Geez, Louise! If I can do that, I can surely complete the last chunk of COUGAR in two weeks, right? Even with a soggy brain.
Posted by The Stiletto Gang at 5:00 AM