To me, funny is Tim Conway with Harvey Korman in a dentist’s chair. Funny is physical and clever and the spectator at the US Open who yelled, “Dilly, dilly!” when Dustin Johnson teed off.

Anyone who’s ever had a pet knows funny. Given enough time, the disaster stories (chewed handbags and shoes, chewed drywall, chewed couches) turn into comedy. That time the dog flooded the guest bathroom? Hilarious. That time the dog had to go to the vet three times in one week because he kept raiding the snack cabinet? Funniest story ever.

For Ellison, Max the dastardly dog brings the funny. An excerpt from Shadow Dancing:

Max slipped through the opening and stood in the driveway laughing at us. Ha! said his doggy smile. Just try and catch me.
I might—might—have been able to lure him inside with the promise of a dog biscuit, that or a turkey club sandwich with extra bacon, but Max spotted a squirrel.
Sadly, the squirrel did not spot Max.
Max’s jaws missed the squirrel’s tail by less than a quarter of an inch.
The panicked animal ran and Max followed.
“Max!”
Max ignored me.
The squirrel cut across my yard and ran into my neighbor’s lawn. My evil neighbor’s lawn. Margaret Hamilton was a witch of the flew-a-broomstick-at-midnight, stirred-a-cauldron, had-warts-on-her-chin (not really) variety. And she did not like my dog.
“Max!”
Intent on the chase, he didn’t even turn his head.
And the squirrel? Why was it ignoring a perfectly good oak tree?
It was unfortunate (but not surprising) that Margaret chose that moment to step outside. She possessed some kind of witchy internal radar that alerted her when any member of my household so much as touched a blade of her grass.
It was even more unfortunate that, having made the decision to scowl at me from her front steps, she didn’t close her door behind her.
Most unfortunate of all was the squirrel dashing between her legs and into her house.
No. That’s wrong. MOST unfortunate was the fact that my dog followed the squirrel—through Margaret’s legs and into her home. 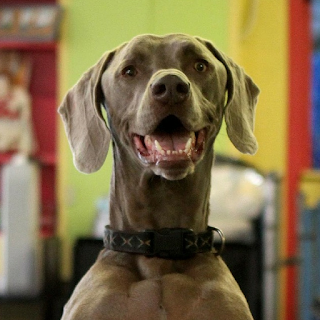 Our own dastardly dog – the inspiration for Max 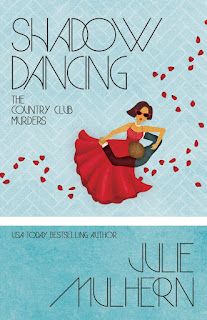 Julie Mulhern is the USA Today bestselling author of The Country Club Murders and the Poppy Fields Adventures.

She is a Kansas City native who grew up on a steady diet of Agatha Christie. She spends her spare time whipping up gourmet meals for her family, working out at the gym and finding new ways to keep her house spotlessly clean--and she's got an active imagination. Truth is--she's an expert at calling for take-out, she grumbles about walking the dog and the dust bunnies under the bed have grown into dust lions.

Action, adventure, mystery, and humor are the things Julie loves when she's reading. She loves them even more when she's writing!