Coming Back by Debra H. Goldstein 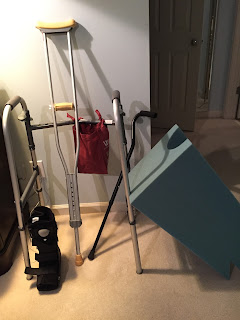 I’ve always been good at multi-tasking, enhanced by good organizational skills, the ability to prioritize, and being a fast reader. Mixing those skills and luck, my to-do-list usually ends up checked off. Recently though, my life has been a perfect example of John Lennon’s famous comment: “Life is what happens when you’re busy making other plans.”


As most of you know, I spent six wonderful months on the road promoting Should Have Played Poker. During that time, I didn’t write much. I tried, but juggling everything pretty much limited me to finishing and revising a new book; keeping up with my personal and Stiletto blogs, as well as the numerous ones I wrote as part of my promotional activities; and turning out a few short stories. I figured I would get serious about my word count when life slowed down.


Unfortunately, everything came to an abrupt halt when I ruptured two tendons in my foot and had to undergo reconstructive surgery. Six screws, a plate, and two tendon transplants later, the only thing I was capable of was lying around in la la land with my foot elevated. My big accomplishment, while keeping my foot above my heart twenty-two out of twenty-four hours, was counting down my totally non-weight bearing time - two weeks in a splint and ace bandages because the swelling was too much for a cast, two weeks in a purple cast, and two weeks in a bright green cast. During this period, my ability to focus on much of anything was compromised.


I finally regained my ability to lie around with the television on. Four seasons of House of Cards, two of Grace and Frankie, ten episodes of The Crown, and a sampling of three or four other shows, and I started getting bored. Although I continued to have to elevate my foot, the introduction of physical therapy and limited weight-bearing in a boot added a spice of variety. Sadly, I still lacked the ability to string words together. And then, one day, a flash story, A Garden for Adonis, came together. It was published last week in SEEDS (http://conta.cc/2igTGS0).


Although I’d like to tell you I wrote non-stop after that, it would be a lie. Returning to writing came slowly. The ideas were there, but my ability to sustain my attention was not. It took several weeks to write and submit one short story. I had planned to write three pieces during the same time period, but life didn’t work out that way. I don’t know if the story, A Golden Eclipse, will ever be published (I like it, so I hope it will), but I know one thing for sure. I’m back!
Posted by Debra H. Goldstein at 6:00 AM