It Tolls for Thee

John Donne wrote, “No man is an island.” As writers, we often labor in isolation, occasionally taking our notebooks to coffee shops or book stores to be close to activity. There may be a gentle musical selection playing in the background or perhaps we’ve arrived with our own headphones, so we can “control” and “enhance” that aspect of concentration for the task. Keeping our distance, yet staying close to humanity.

If we have the opportunity to study writing among our peers, fellow scriveners seeking to combine words in the most effective ways, we embrace the joy of being with those who understand what it is like to labor alone. We spend time with colleagues who face the same lonely struggles, then return to our work with new resolve and inspiration. 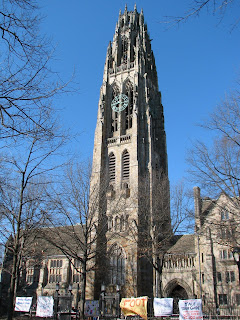 This summer, I had the remarkable experience of attending Yale University’s Summer Writing Program, where small classes of students were paired with incredibly talented authors for twelve hours of instruction, additional special lectures, and a private analysis of each student’s submission. I was thrilled to find myself in a class with six others learning about writing mysteries from the fabulous Lori Rader-Day. It was truly life-changing.


Walking down the streets to our Yale class room, I could hear the chiming of bells from the carillon in Harkness tower. What an wonderfully appropriate musical accompaniment for my ivy league adventure!


Passing Calhoun Residence Hall, where we roomed, I noticed a carved relief of a scholar in his robes, sitting at his desk, smoking his pipe, apparently concentrating on his studies while surrounded by stacks of books. With the carillon bells chiming in the background, I could almost imagine striding across campus in my own cap and gown, heading to confer with my fellow scholars. 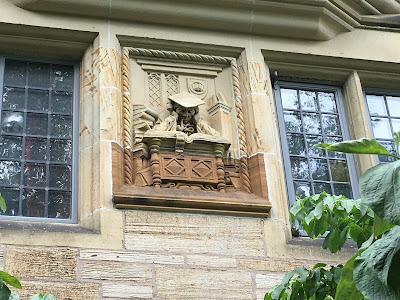 And those bells followed my every footfall.

Carillons can be traced back to medieval times when they were used as a means of notification or alarm system for a town. The instrument, with a keyboard like an organ, is connected to at least twenty-three bells that are housed in a belfry. The one at Yale has fifty-four bells, each emblazoned with the words “FOR GOD, FOR COUNTRY, AND FOR YALE.” Generally, they sound twice a day at Yale, but we had arrived during the week of the Yale Carillon Guild convention.


Those bells became a constant companion. In fact, for two days straight, during our ENTIRE three-hour class period, the carillon played without ceasing.


At times, music can progress from mere accompaniment to severe distraction. That is exactly what those marvelous bells did. While we sought to discuss the fine points of characterization, plotting, and revision, the bells pealed forth, sometimes merrily and other times solemnly, until their sound became predominant in our heads.


Yet, from the incessant ringing, another literary lesson emerged.


As mystery writers, we couldn’t help but consider how constant noise could manipulate a mind and drive an intellect to dire circumstances—like murder. I remembered how Edgar Allan Poe’s guilt-ridden protagonist in “The Tell-Tale Heart” insists what he hears is not madness: “The disease had sharpened my senses – not destroyed – not dulled them. Above all was the sense of hearing acute. I heard all things in the heaven and in the earth. I heard many things in hell.”

Taking another look at the scholar on the Calhoun Residence Hall relief, I began to wonder if he was consumed with his work or with the effort of attempting to block out the bells. There was something in his expression that I thought might resemble Poe’s protagonist’s anguish.


So, I decided that it was good that writers can channel any murderous urges into prose rather than action. As John Donne says: “Each man’s death diminishes me, For I am involved in mankind, Therefore, send not to know, For whom the bell tolls, It tolls for thee.

Not a bad lesson to have learned from a carillon at Yale!