The weekend was beautiful, both outside and in the historic Columbia Club where the conference was held. According to the valet, the Club was built in 1924. The great lobby was filled with dark wood and a stone fireplace, perfect for burning clues in a pinch. The place was soaked in history.

Friday I attended a fascinating presentation by Karen Cooper, a retired CSI from Florida, on how to find a burial site in the wild.  From finding the grave, including pointing out disturbances on the soil, to excavating, Karen gave us a real life look into how law enforcement handles buried victims. We even talked about the most likely suspects based on body positioning.

Then we had an speaker who wanted to talk about the workings of arson investigation and the use of science in criminal cases.

That evening, we were on our own for dinner, but the conference had set up a screening of an old noir movie for later. I spent the time preparing for the panel I was moderating on Sunday.

Saturday morning I had my first panel talking about twists in mysteries. Although we all could point to twists in books and movies, talking about adding them into our writing process was difficult. Mainly we agreed that we hope for a twist, but just write the plot we'd planned.

Sunday's panel was on the topic of romance in mysteries. Some of my panelists but one wrote romantic suspense and the other two, like me were cozy writers. We had a spirited discussion on the increase in sex in current day stories, and the change over time on what a 'normal' woman as your amateur sleuth could get away with and still be seen as a creditable investigator.

Between panels, book signings, and chatting up readers and other authors, my weekend was filled with mysterious goings on.

Have you attended a mystery conference?

Squee --- IF THE SHOE KILLS is out in print now and the digital release is a week away - November 10th!!!! 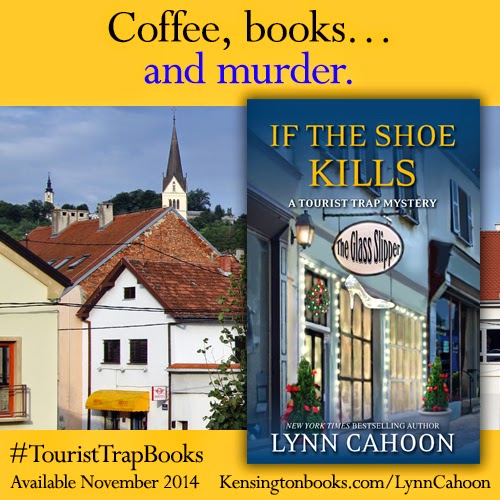 The tourist town of South Cove, California, is a lovely place to spend the holidays. But this year, shop owner Jill Gardner discovers there’s no place like home for homicide. . .

As owner of Coffee, Books, and More, Jill Gardner looks forward to the hustle and bustle of holiday shoppers. But when the mayor ropes her into being liaison for a new work program, 'tis the season to be wary. Local businesses are afraid the interns will be delinquents, punks, or worse. For Jill, nothing’s worse than Ted Hendricks--the jerk who runs the program. After a few run-ins, Jill’s ready to kill the guy. That, however, turns out to be unnecessary when she finds Ted in his car--dead as a doornail. Officer Greg assumes it’s a suicide. Jill thinks it’s murder. And if the holidays weren’t stressful enough, a spoiled blonde wants to sue the city for breaking her heel. Jill has to act fast to solve this mess--before the other shoe drops. . .
Posted by The Stiletto Gang at 6:34 AM