One More Blog About Twilight

or  I Know, I Can't Believe We're Still Talking About It Either
by Bethany Maines

A friend of mine and I were comparing notes on the Twilight series, which she loved and I mildly enjoyed enough to make it through the first book and then wikipedia the plots of the others so I could find out what happened in the end.  Our discussion centered on the fact that much of the media portrays Bella as a passive, whiny person who contrasts poorly with the likes of Hermione, Buffy, Katniss or Leia.  My friend thought that since Bella didn’t have super powers that she would never compare well in any competition with Buffy et all.  I thought that while some of the media interpretation of her whininess is undeserved, that Bella, super powers or not, just isn’t much of a strong feminist role model.  The argument eventually concluded with, “Yeah, well, you know what’s feminist? Writing whatever you want and not having to censor yourself because feminists won’t like it.”  Oh, snap. Point and match. 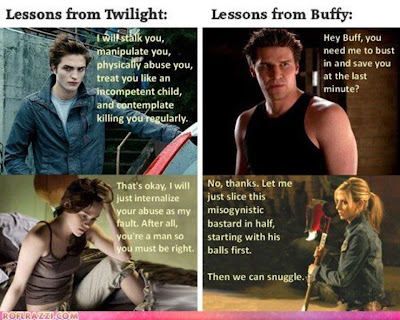 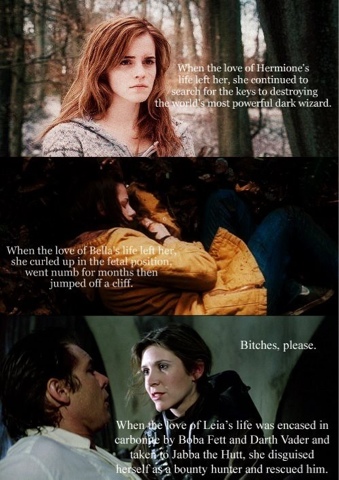 But I think there’s another reason that Bella isn’t an apples to apples comparison to Buffy, Hermione, or Leia.  Each of those three happened upon love while pursuing a greater cause.  They had epic events with some love.  But Bella flipped that around – she fell in love and then had a few epic events. And of those two scenario’s, which sounds more likely to happen to your average teenager?  I don’t wonder that Bella resonates with a generation ­– falling in love, getting depressed, getting back together, it’s all part and parcel of being a teen.

But… I just don’t like the decisions that Bella made. As a kid I thought Eowyn (LoTR), Esther (Bible), and Leia (Star Wars) were awesome.  Smart, strong, sexy women with a rebellious streak and a thing for royalty (except for Leia, who of course, liked scruffy looking nerf herders).  My parents went out of their way to point out good role models because they wanted me to know that women could do whatever they wanted.  But what if I had wanted to be married at 18 to my on-again off-again boyfriend like Bella did?  That would not have gone over well with anyone in my family except for my really sexist grandmother. If my best friend in high-school had been Bella, I would have been fairly horrified at her decision making skills, and chalked it up to an a broken family and low self-esteem.

I know, I know, Twilight is just a fiction novel – not a how-to manual for life.  It’s a romantic story that features star-crossed true-love and a happy ending.  But if I ever have any offspring of the female persuasion I won’t be pointing out Bella; I’ll be pointing at Stephenie Meyer and saying, “Look how she wrote a book that touched the lives of millions of people – you can do that to!”

Bethany Maines is the author of Bulletproof Mascara, Compact With the Devil and Supporting the Girls.  Catch up with her at www.bethanymaines.com or check out the new Carrie Mae youtube video.
Posted by The Stiletto Gang at 4:00 AM