by Bethany "Run for the Hills" Maines

Thanksgiving is looming and that means that... gulp... Christmas is around the corner!  But what that means for me is that I have some awesome new releases to share with readers. That's right, I've been hard at work on stories of murder, romance, theft, and puppies. I may just need the holidays to happen so I can get a rest. On November 15th (that's this THURSDAY), I have a short story, Mayhem & Mahalo, included in the the Stiletto Heeled issue of Switchblade Magazine.  I'm pretty thrilled to be included in this list of all women crime writers and can't wait to get my own copy and see what mischief my co-conspirators are up to. Next up is Blue Christmas, a romantic holiday adventure (now available for pre-order) which will be released on December 4th! This cross-genre romance / crime story has everything you need to kick off the holiday season. 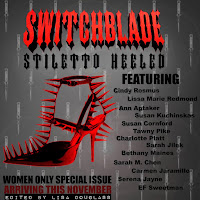 Hawaii—the land of sun, surf, and a giant pile of dead bodies. Paige Kaneko thought she had left the Kaneko family’s criminal ways behind her, but when a 3 a.m. text from her brother asks for one simple thing—help—Paige can’t say no. Now Paige must get her brother and herself out of a situation that includes eight dead bodies, a backpack full of cash and one slightly dented heroin addict.

High-rise burglary to pay for her grandmother’s cancer treatments might not be ideal, but Blue Jones is determined to do what it takes to get her grandmother the best care possible. She just didn’t plan on being tackled by gorgeous Jake Garner. Jake, drunk and recently dumped, mistakes Blue for the dog sitter and begins shoving his ex’s belongings at her including her French Bulldog—Jacques. But soon Jake is being pressured to return the dog and Blue is being targeted by mysterious attackers. Can Jake and Blue stop these mystery men without also getting Blue arrested for theft? For Blue, Christmas has never been quite so dangerous. For Jake, Christmas has never been quite so Blue.

Bethany Maines is the author of the Carrie Mae Mystery Series, San Juan Islands Mysteries, Shark Santoyo Crime Series, and numerous short stories. When she's not traveling to exotic lands, or kicking some serious butt with her fourth degree black belt in karate, she can be found chasing her daughter or glued to the computer working on her next novel. You can also catch up with her on YouTube, Twitter and Facebook.
Posted by Bethany at 12:30 AM