Me And The Liberty Bell 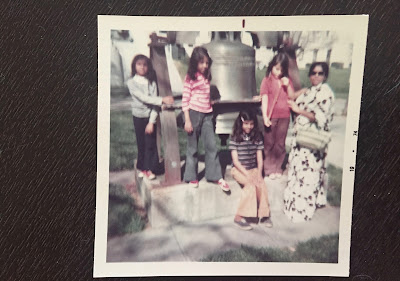 This is a picture of me, at nine years of age, with my mom and two sisters, and a girl who lived in the same apartment complex as us. I’m the one in the pink-and-white striped shirt, flare jeans, and matching pink canvas shoes. Through process of elimination, I'm guessing my dad took this photo. I stand next to one of the fifty-three replicas of the Liberty Bell, situated on the grounds of the Mississippi State Capitol in the city of Jackson.

The year is 1974 and I’d been in the U.S. for almost two years, and lived in the city of Clinton for half that time. I remember absolutely nothing about this trip into downtown Jackson, but I love the candid poses, especially of my mom, who’s rocking her sunglasses, her long sari, and one of those knitted handbags that was all the fashion back then. She was a young thirty-two-year-old.

I’m sure at this time the only car my parents owned was a tan VW beetle my dad had purchased three or four years earlier, so I’m left wondering how we were able to transport six people for this escapade. But, then again, that was the days before Ralph Nader and his “seatbelts in every car” mantra. We four kids must have just piled into the backseat.

I have vague memories of the girl, who I think was in my younger sister’s class. She used to “borrow” her divorced mother’s cigarettes and smoke them while she hid behind one of those gigantic transformers, that rested on the premises behind the apartment buildings.

And, then, we heard she was caught shoplifting. One afternoon, we knocked on the door to her apartment and without waiting for an answer, we opened it. Two men sat on the couch, talking, their voices just above a whisper. Across from them, her mother sat in an armchair, her brow knitted and her lips tightened into a thin line. We’d barged into what was obviously a serious conversation.

We didn’t see much of her after that. In February, 1975, my parents purchased a ranch home and we moved into a subdivision around the corner. 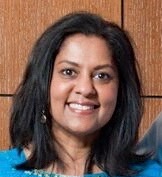 Paffi S. Flood is the author of A Killing Strikes Home. You can also find her on twitter and facebook.
Posted by The Stiletto Gang at 1:30 AM