Getting Back in the Groove

The writing groove that is.

It's never easy after the holidays, and this time it seems even harder than usual.

Because I was having all sorts of heart tests, had an angiogram scheduled that had to be put off for over a week because I caught the flu, had the test (which turned out much better than the doctor expected), and then it was time to decorate for Christmas. Frankly, I was still recovering from the procedure and being sick and had no energy.

Fortunately, daughter-in-law and granddaughter came to the rescue and did it for me--and then undecorated when the time came.

Besides our usual get-together with son, his wife, and his sons, their wives, his daughter and her hubby and two great-grands on Christmas Eve, we visited with daughter and all her family on Christmas Day. Also talked on the phone to our other two daughters.

Hubby and  have watched Netflix movies galore including series that we've missed, and gone to the theater to see two movies: Saving Mr. Banks and Frozen. Liked them both.

I have squeezed in some book promoting. Learned that another of my Deputy Tempe Crabtree mysteries is now available on audio, from Amazon and iTunes. Bears With Us. 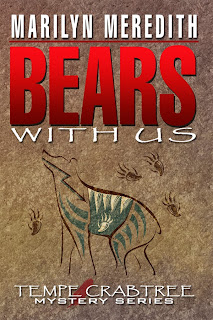 And yes, I've written a few pages in the next Deputy Tempe Crabtree mystery series--but few is the key word here.

I really need to get with it because the critique group I belong to is starting up again and I always like to be a few chapters ahead.

As with every author, I have other commitments ahead. But I've always worked around them in the past, and I shall do it again.

If that sounds like a New Year's resolution, well that's as close as I'll ever get to one.

The truth is, the older I get the harder it is to stick to a schedule--and time goes by much quicker than it did when I was younger.

Because the only way I'm going to find out what's going on in Tempe Crabtree's life, what crimes she's going to solve, is to get into that writing groove--I will.

Email ThisBlogThis!Share to TwitterShare to FacebookShare to Pinterest
Labels: Bears With Us, Getting Back in the Writing Grove, Marilyn Meredith